Not All Kids Born in the US Should Be Made Citizens 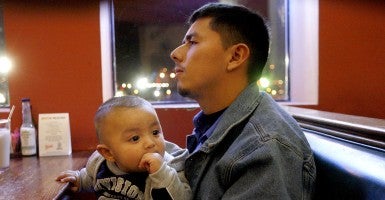 Human experience and common sense tells us you get more of the behavior you reward – and there has been no better case study of that on a policy level than the issue of illegal immigration.

That is why any serious immigration reform considered in the next Congress should revisit the concept of birthright citizenship (namely that all children born on U.S. soil are citizens, regardless of their parents’ status), or what is sometimes referred to as the “anchor baby” issue.

Congress should do so for primarily the following reasons:

According to NumbersUSA, citizenship is given to “an estimated minimum 400,000 babies each year who don’t have even one parent who is a U.S. citizen or permanent legal immigrant.”

Simply having a baby in the U.S. doesn’t mean the parents, if here illegally, will be allowed to stay – they and the child can still be deported and the child can then apply to re-enter the U.S. when he/she reaches 21 years of age.  But there’s no question that an illegal immigrant who has a U.S.-born child has a better chance than others of getting an immigration court or judge to grant him some sort of legal status or delay in deportation.

And when it comes to increasing immigration numbers in the U.S., findings from a report by the Center for Immigration Studies in 2010 show chain migration is the main driver:

Of the 1,130,818 immigrants who were granted legal permanent residency in 2009, a total of 747,413 (or, 66.1 percent) were family-sponsored immigrants. A change to U.S. immigration laws in the late 1950s — one that allowed for the admission of extended family members outside the nuclear family — resulted in the average annual flow increasing from 250,000 then, to over 1 million today.

For America’s first 100-plus years, the idea that just because someone was born on U.S. soil made them a U.S. citizen was disavowed.  But a Supreme Court decision in 1898 (yes, there was judicial activism back then, too) that broadly and wrongly interpreted the 14th Amendment’s Citizenship Clause changed all that.

A recent study of 194 countries shows that only 30 grant a form of birthright citizenship.

The original intent of the Citizenship Clause was to ensure former slaves were given citizenship status.  It was never intended to give such status to children born here because their parents were living here as foreign ambassadors, diplomats or consuls, or simply because their non-citizen parent(s) had a baby while visiting or residing, legal or otherwise, in the U.S.

It is just plain wrong to claim that the children born of parents temporarily in the country as students or tourists are automatically U.S. citizens. They do not meet the 14th Amendment’s jurisdictional allegiance obligations. They are, in fact, subject to the political jurisdiction (and allegiance) of the country of their parents. The same applies to the children of illegal aliens because children born in the United States to foreign citizens are citizens of their parents’ home country.

I rarely suggest America follow international trends, but this is one area where we could take a cue from others around the world. A recent study of 194 countries shows that only 30 grant a form of birthright citizenship.  No European countries allow it – the United Kingdom ended the practice in 1983 and Ireland in 2004. Among advanced economies, the U.S. and Canada are the only two countries that still allow it.

Congress is empowered via the Constitution to determine our country’s naturalization laws and should put an end to “birthright” citizenship.