Since Obama Took Office, the Federal Debt Has Increased by Almost 70 Percent 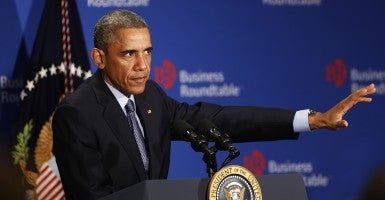 Just six years ago when President Obama took office, total debt stood at $10.6 trillion, which means it now has increased by almost $8 trillion—roughly 70 percent—during his tenure as president. (Photo: Polaris/Newscom)

Just six years ago when President Obama took office, total debt stood at $10.6 trillion, which means it now has increased by almost $8 trillion—roughly 70 percent—during his tenure as president.

The surge in total debt, which has hit 103 percent of gross domestic product, comes at a time when politicians are championing falling deficits and claiming them as evidence that government spending is under control.

Although deficits have been falling since 2009—when they were at record levels with a dearth of revenue to offset massive spending—they don’t tell the full story. This past year the government still spent $486 billion more than it took in. And the annual deficit is expected to reach trillion-dollar levels again within 10 years, further accelerating the growth of the national debt and interest payments required to service it.

Furthermore, spending that fuels the debt is not primarily caused by increases in discretionary spending such as defense, education and infrastructure, but rather by growth in mandatory programs such as entitlements.

The major entitlement programs, including Social Security, Medicare and Medicaid, take up almost 50 percent of all federal spending and are only expected to increase in size as more Americans age and retire. Indeed, entitlements and net interest are projected to consume 100 percent of the government’s tax revenue by 2030.

The future growth in entitlements will exacerbate the nation’s debt problem. Larger government debt poses the threat of higher taxes in the future to pay interest on the debt, thus likely inflicting on younger Americans and future generations a greater tax burden and weaker economy.

But the negative effects do not only accrue in the long run. The U.S. is set to hit its debt limit in March, which means lawmakers must decide how to address the nation’s fiscal scenario.

When debating the issue, Congress should adopt a plan to rein in growing spending and debt before increasing the debt ceiling. What they absolutely should not do is “suspend” the limit again, which gives the government a blank check to build upon the $18 trillion we already owe with no limit in sight. As Heritage Fellow Romina Boccia observes, by enacting a debt limit suspension, “Congress effectively abdicates its constitutional power to control the borrowing of the federal government.”

But a reform-minded Congress should not wait until March to address the nation’s fiscal irresponsibility.

It only took 407 days for the nation to go from $17 trillion to $18 trillion in debt. That should be a sign that Washington needs to fix its spending habits, which the incoming Congress should make a priority.

Some good opportunities to restart the conversation would be to eschew the broken budget process—which perpetuates spending on bad programs—and to enact entitlement reforms. $18 trillion and counting is already too much. Congress needs to act now so that future Americans won’t have to finance our generation’s decadent spending.