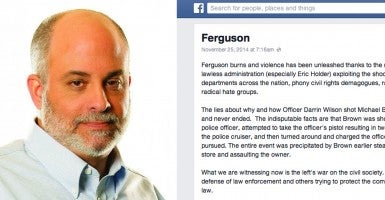 Conservative commentator and radio show host Mark Levin didn’t sugarcoat his reaction to the riots that broke out after the grand jury’s decision not to charge police officer Darren Wilson in the shooting death of Michael Brown, 18, in Ferguson, Mo.

“Brown was shot because he assaulted a police officer, attempted to take the officer’s pistol resulting in two close-range gun shots in the police cruiser, and then turned around and charged the officer as he was being pursued,” the mercurial Levin wrote yesterday on his Facebook page.

>>> Here’s How Americans Responded the Morning After #FergusonDecision, in 35 Tweets

Levin’s post, which is going viral, calls the the violent reaction to the no-indict decision “the Left’s war on the civil society.”