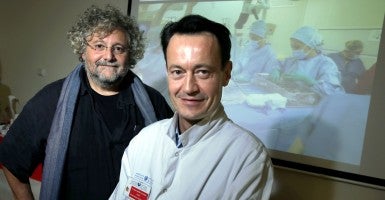 Jean-Marie Jouannic and Michel Zerah. Their groundbreaking fetal surgery was performed at the Armand Trousseau Hospital in Paris. (Photo: Newscom)

France is celebrating its first successful fetal surgery after a baby girl was born Nov. 9 at full term and in good health.

“Today, there is a demand from couples who want to undergo this surgery. It would almost be unethical not to offer it to them.”

Nearly four months earlier, in July, doctors at Armand Trousseau Hospital in Paris operated on the 20-week-old fetus with spina bifida while inside her mother’s womb. To prevent brain damage, doctors recommended the expectant mother undergo fetal surgery, an unprecedented treatment in most European countries.

“In France, we have been considering this surgery for around 10 years. Many were asking whether there was a place for this type of intervention in our country,” Dr. Jean-Marie Jouannic, who led the surgery, told Agence France-Presse.

According to the Spina Bifida Association, the congenital disorder results in “split spine” and occurs “when a baby is in the womb and the spinal column does not close all of the way” and is left exposed. If untreated, it can lead to severe neurological damage and physical complications.

“Ten days after the surgery, the brain anomalies that were caused by the disorder had disappeared. It’s incredible to be able to protect this little girl’s brain to enable future learning,” said Jouannic.

Between 1,500 and 2,000 babies are diagnosed with spina bifida each year in the United States, according to the National Institute of Neurological Disorders and Stroke. The Children’s Hospital of Philadelphia, the worldwide leader in fetal surgery, has performed hundreds of prenatal operations.

“Today, there is a demand from couples who want to undergo this surgery. It would almost be unethical not to offer it to them,” said Jouannic.