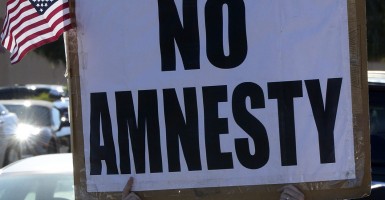 Last month, in a speech at Northwestern University, President Barack Obama declared that the midterm elections were actually a referendum on his policies. “I am not on the ballot … But make no mistake: (My) policies are on the ballot. Every single one of them.”

How right he was. And how resoundingly voters rejected those policies on Nov. 4!

Throughout the country, voters expressed opposition to the president’s push to amnesty millions of illegal immigrants. Even the liberal electorate of Oregon rejected granting driver’s licenses to illegal immigrants with a two-thirds majority.

As Ron Fournier, senior political columnist for the National Journal tweeted: “After this repudiation, acting on #immigration by fiat would be the political equivalent of … flipping the country the bird.”

Apparently, the president’s OK with that. Only a week after the elections, while Obama toured Asia, administration officials slipped the ever-supportive New York Times details of the president’s plan to bypass Congress and grant amnesty, via executive fiat, to as many as 5 million illegal immigrants.

Does the president really have the gall to ignore the will of the people? Well, he’s certainly done it before.

Remember the debate over Obamacare? As the president was trying to ram the bill through Congress over unanimous opposition from Republicans, Massachusetts held a special election. The contest became one over the law itself. It ended with the people of Massachusetts – hardly a conservative bastion – electing a Republican to replace Ted Kennedy in order to defeat Obamacare.

But the president and his allies ignored the voters and pushed through Obamacare anyway. We’re still reaping the bitter fruit from the president’s unwillingness to compromise.

Unfortunately, the president feels no more bound to respect the powers and wishes of Congress than he does those of the electorate. When lawmakers rejected his cap-and-trade energy tax and his DREAM Act amnesty for illegal immigrant children, the president blithely issued orders carrying out the policies anyway.

This year, Congress wisely declined to pass legislation granting amnesty to more than 11 million illegal immigrants. Post-election polls show that 74 percent of Americans, including a majority of Hispanics, don’t want the president to impose amnesty by executive fiat. Yet here he is, once again pledging to grant executive amnesty before the end of the year.

[Editor’s note: On Nov. 20, Obama announced he would go forward with the executive action on immigration. This column was original published prior.]

If he does move forward with this unpopular, inappropriate action, what can lawmakers do about it? For starters, Congress can exercise its constitutional prerogative – the power of the purse – and refuse to fund any actions or resources needed to implement an executive amnesty. For added good measure, they could pass a resolution affirming that any future president can easily revoke any such order, and that all the information collected regarding amnesty-seekers could be used for future enforcement actions. That might give amnesty activists pause for thought.

Why is it so important that Congress take a firm stand against imposing amnesty via executive fiat? Because what Obama is proposing is more than just bad policy. Such high-handed executive action could provoke a Constitutional crisis or lead to a new, chaos-inducing “normal” for presidential behavior.

Remember when filibusters of judicial nominees were rare? For a long time, Republicans insisted it was inappropriate. But then came a series of Democrat-led filibusters. After just a few years of it, Republicans responded in kind. Indeed, they filibustered so routinely that Senate Democrats triggered the “nuclear option,” outlawing filibusters on district and appellate court nominations.

Could executive action on immigration break down the tradition of presidential restraint, ushering in an era of government by executive fiat? Might it embolden leaders of each party to disregard the checks and balances set out in the Constitution? Might a future president simply ignore environmental, immigration, tax and other laws that conflict with his preferred policy? Legal scholars like Robert Delahunty, Jonathan Turley and John Yoo think such scenarios become increasingly likely every time the president decides to make policy with his “pen and phone,” rather than via legislation.

Now is the time for President Obama to carefully consider his legacy. Does he want to be the president who abused his constitutional authority and launched the era of Imperial Presidencies? Or, will he listen to the voters and reject amnesty? The decision is his.