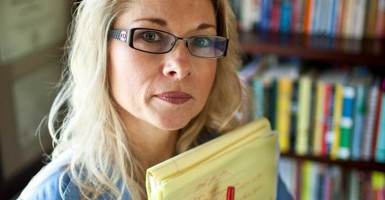 Christian schoolteachers who object to being forced to help finance the political agendas of unions yesterday moved a step closer to having their case heard by the U.S. Supreme Court.

A three-judge panel of the U.S. Court of Appeals for the 9th Circuit issued an order that allows the teachers to petition the Supreme Court to consider their argument that California’s “agency shop” law is unconstitutional because it requires them to pay for political activity they do not support.

The teachers unions could ask the full 9th Circuit to reconsider the panel’s ruling. But Terry Pell, president of the Center for Individual Rights, the non-profit public-interest law firm representing the teachers along with the international law firm Jones Day, does not expect the unions to do so.

“The next stop is the U.S. Supreme Court,”  Pell told The Daily Signal adding:

This ruling [from the 9th Circuit] happened much more quickly lhan we had a right to expect. It’s a big step forward. The panel hit the nail on the head. There’s nothing left for the 9th Circuit to do. This is a question of law that has already been decided so it has to go to the Supreme Court.

Pell said the teachers are likely to petition the Supreme Court to hear the case by early January and the court to decide whether to take it in March or April. A ruling would not be expected until 2016.

California’s “agency shop” law makes payment of union dues a requirement for public employment. The Daily Signal previously reported that Friedrichs and her co-plaintiffs argue the law is unconstitutional because it requires them to finance political activism they oppose.

The California Teachers Association, the largest affiliate of the National Education Association, has argued that non-union employees should pay “fair share” fees because non-union members benefit from union representation.

Under the California agency shop law, schoolteachers are not required to join the union, and they can opt out of the approximately 30 percent of dues the union acknowledges are overtly political.

California teachers, who typically spend up to $1,000 a year in dues, can apply for a refund and generally receive $300 to $400 back. But Friedrichs has said this process brings scrutiny and stigma from the union and colleagues.

Pell said that, beginning in the mid-20th century, the Supreme Court essentially “carved out an exception to the First Amendment” where labor law is concerned in a series of decisions that culminated in the 1977 Abood v. Detroit Board of Education ruling.

In the interest of maintaining “labor peace,” the court reasoned, it was necessary to guard against “free-riders” who might dissent from the union position but still benefit from the collective-bargaining process.

The union spent more than $26 million to oppose Proposition 38, a ballot measure that would have created a school-voucher program in California.

The union spent $50 million in 2005 to oppose three measures, one of which would have made changes to the probationary period for new teachers and another having to do with school-funding requirements. More closely related to this case, the third ballot initiative would have prohibited use of agency fees for political contributions without workers’ consent.

Friedrichs and several of the other teachers who filed suit have resigned from the California Teachers Association and now belong to the Christian Educators Association International.