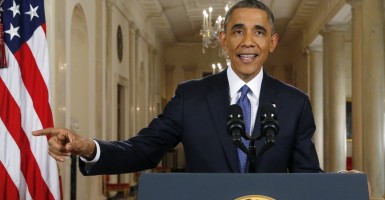 There’s just one catch: Nobody is calling for those policies.

What is broken about our immigration system?

We could streamline legal immigration and encourage more high-skilled immigration, no doubt. But the biggest problem is lack of law enforcement. Instead of addressing that issue, Obama’s order doubles down on our lawless system by granting a new, temporary status for millions of illegal immigrants.

Congress should do everything in its power to stop the president’s lawless and inappropriate amnesty.

Trying a mass amnesty might have more merit if it had not been tried before.

In 1986, Congress passed, and President Ronald Reagan signed, a bill granting a “one-time only” mass amnesty to 3 million along with promises of law enforcement and border security. We’re still waiting for those later promises to be fulfilled, but now we have 11 million or more illegal immigrants.

Even Obama once understood this: “I believe such an indiscriminate approach would be both unwise and unfair … this could lead to a surge in more illegal immigration,” he said.

Congress and the American people oppose trying this same unfair policy without first ensuring our border is secure and our laws are enforced. Instead of working with Congress on areas in which there is agreement—like reforming our legal immigration system—the president continues to insist on an amnesty-first policy.

He also noted that the “politics of the issue are tough.” (I guess he would know since his “policies were on the ballot”—including amnesty—and his party was defeated soundly.)

Obama pointed out that some people use the issue “around election time to get votes.” Here he might be on to something. His immigration policies are incredibly unpopular, as evidenced by polls and especially by the fact that the president decided to take these actions after the midterm elections. His contempt for the voters’ wishes and their representatives in Congress was palpable.

Using Orwellian language, Obama talked about prioritizing enforcement and shielding from deportation. But he has already done these things before. Tonight, he went a step further and is preparing to give out millions of new work permits to those who are here illegally.

There are 10 things Obama could do to really prioritize enforcement and start repairing our broken system. These are all within his power as president. Instead, Obama has decided to stretch the concept of prosecutorial discretion behind any reasonable limit.

Congress should do everything in its power to stop the president’s lawless and inappropriate amnesty. It is bad policy. And it also steals too much power from Congress and gives it to the presidency.