Here We Go Again: Uncle Sam Is Back in the Subprime Lending Game 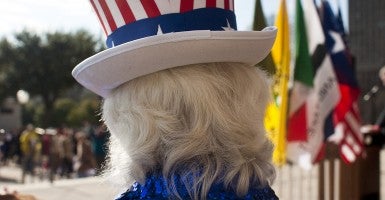 The headline in newspapers one recent weekend read like an April Fool’s joke, but it wasn’t April 1. The Obama administration announced it wants to provide a little more juice to the now-lackluster housing market by bending the home lending rules to make it easier for banks to make loans and marginal buyers to take on a mortgage.

One of the big changes: The Federal Housing Finance Agency will lower down payment requirements from an already absurdly low 5 percent to a ridiculously low 3 percent on many loans that are eligible for federal mortgage insurance assistance.

Maybe the Obama Democrats should start running billboards across the country announcing: “Uncle Sam is back in the subprime lending game.”

Is the Obama administration actively trying to create the conditions for another housing collapse? What everyone who follows the housing market knows full well is this: The major reason for the millions of home foreclosures during the meltdown was the policy of low down payments on home loans.

One study by researchers at the University of Texas in Dallas looked at some 30 million mortgages issued before the bubble burst and found that “[t]he evidence strongly suggests that the single most important factor is whether the homeowner has negative equity in a house” — i.e., whether they paid a high or low down payment. This study found the down payment was a much stronger prediction of whether a loan would end up in default than the credit score of the borrower.

As the housing bubble kept inflating from 2001 to 2006, aspiring homeowners could walk into a bank or a branch of Countrywide Financial and walk out with home loans with as low as 2.5 percent or 3 percent down payment (including closing costs, which also could be financed through the loan). The Wall Street Journal, Investor’s Business Daily and other free marketeers warned of the insane risk that taxpayers were underwriting on almost $1 trillion in mortgages. They were shouted down as alarmists.

Back then the laws of financial gravity seemed to have been suspended, and when home prices went up, they stayed up. Even if the home ended in foreclosure, with Fannie Mae, Freddie Mac and the Federal Housing Administration providing a near 100 percent taxpayer repayment guarantee on more than 80 percent of the mortgages, there was little downside in issuing very risky loans. Underwriting standards flew out the window. The Bush administration celebrated year after year of rising homeownership rates. Everyone was getting fat and happy.

When prices did start to comply with the laws of gravity and collapsed back to earth in 2007, millions of homeowners were underwater. Many lost 20 percent, 30 percent and sometimes 50 percent on the value of the house — especially in then-red-hot markets such as Florida, Nevada, Arizona and California. Thanks to low down payments, these families suddenly were under water on their mortgages, owing more than the house was worth. With little skin in the game, borrowers walked away from the house, sent the lender the keys (“jingle mail,” as it was called) and let taxpayers take the fall.

Boy, did we. Fannie and Freddie ended up needing more than a $100 billion taxpayer bailout.

So Washington tightened the lending rules. No more “predatory loans,” then-Rep. Barney Frank, Massachusetts Democrat, and his gang declared, which was like saying to lenders: Remember those loans we were encouraging you to make last year? No more of that. The feds even sued banks for making loans the government enticed them to issue in the first place.

Amazingly, Fannie, Freddie and the Federal Housing Administration are again insuring between 90 percent and 95 percent of all new mortgages. Taxpayers are back on the hook for hundreds of billions in new mortgages.

Even those lifelines aren’t enough for the homebuilders, the Realtors, the mortgage banks and left-wing advocacy groups for the poor such as the Center for Responsible Lending.

Now we will get 3 percent down payment mortgages again with taxpayer guarantees. Whoopee. The Federal Housing Finance Agency might even suspend some of the rules that had required higher fees on riskier loans. All of this makes about as much sense as injecting Ebola virus into blood supplies.

The way to prevent another catastrophic housing bubble is obvious. The feds shouldn’t be lowering down payments — they should be raising them. Foreclosures would be a rarity if we went back to the sensible old rule of 20 percent down. Studies show that almost none of the mortgages with 20 percent down went belly up.

The housing lobby protests this rule will price moderate-income buyers out of the market. Wrong. It simply means instead of buying a $250,000 house they can’t afford, they are going to have to buy the $175,000 house they can afford. Homeownership is a very worthy goal, but we don’t do any family or community a favor by pushing buyers into a home they are going to lose.

None of these lessons from the last crisis have taken hold in Washington. The best and the brightest in President Obama’s camp want to roll the dice again and lower, not raise, down payments and ease the credit rules at banks. When sensible people protest this insanity, critics call us fear mongers. That, too, is what the housing lobby said on the eve of the previous housing crisis.