A Majority of Voters Think the Country Is ‘Out of Control’ 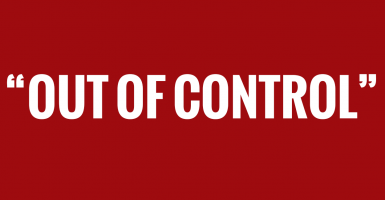 If you live in America today and you believe things are terrific, you’re … well … deeply in the minority.

According to a new Politico poll, despair grips the land. Half the people in the country believe we are on the “wrong track.” Barely a fifth say we are on the right track. And 64 percent–nearly two thirds of those surveyed–said the country is “out of control.”

Politico notes there is no single issue that has left voters feeling anxious, but rather “the accumulation of disparate fears has created a sense of pessimism and frustration across the midterm landscape.” Only 36 percent said they were “confident that the U.S. is in a good position to meet its economic and national security challenges.”

How will this pessimism play on election day? “It’s not a good atmosphere for incumbents,” said former Rep. Tom Davis, a Republican who represented Northern Virginia in Congress for 14 years and is considered an expert on elections.

“It’s traditionally not good for incumbents [on the second mid-term of a two-term presidency,] but it’s much worse than normal. Democrats may not do that badly on Senate races because they have tended to run better campaigns in recent years. But it’s going to be tough for them. Voters are not happy and haven’t been happy for some time.”

According to Politico, terrorism tops the list of Americans’ fears–a full 84 percent view ISIS as a “serious” or “very serious” threat to national security.

Healthcare and Ebola are second and third. More than 57 percent of voters believe their health care costs will rise under Obamacare, but only 7 percent think they will decrease.

Fewer than one in four told pollsters they have “a lot of confidence” the government is “doing everything it can” to prevent Ebola. A third have “no” or “not much” confidence and 39 percent say they have only “some confidence.”

When asked about their general outlook on the United States, 49 percent of respondents said they are “generally optimistic” and 50 percent said they were “generally pessimistic.”

The poll surveyed 840 likely voters in “the states and districts with the most competitive Senate and House races, as ranked by the University of Virginia Center for Politics.” It has a margin of error of 4.2 percentage points.