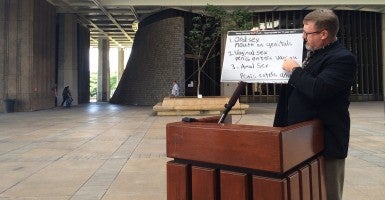 McDermott holds up a copy of notes from an 11-year-old student enrolled in the sex education classes in the state’s public schools.(Photo: Civil Beat/Creative Commons)

HONOLULU – Middle school students who participated in a controversial sex education program in Hawaii were rewarded with gift cards from the University of Hawaii Center on Disability Studies.

“The Pono Choices program provides gift cards to students who have taken the course as an incentive to complete student surveys,” said Donalyn Dela Cruz, a spokeswoman for the Hawaii State Department of Education. “Student opinion is the most powerful measure in the effectiveness of the program, and we support the efforts in seeking such feedback.”

Rep. Bob McDermott, R-Aiea, who has a 12-year-old son in public school, led the charge to pressure the state Board of Education to pull the curriculum. He accused the DOE of “normalizing homosexual lifestyles” and “putting students at risk by withholding critical facts.”

After pressure from McDermott and the public, the DOE pulled the curriculum and formed a task force to review concerns. The task force released 11 recommendations on June 6 and stopped the implementation of the program until developers addressed the concerns and inaccuracies. The program was reinstated over the summer.

McDermott said the gift cards are a waste of taxpayer money.

“This is a shameless manipulation of the data – giving 11-year-old kids a $10 dollar gift card, and then asking them how they liked the program,” McDermott said.

“Hawaii’s parents are in the unique situation of having their own tax dollars used to propagandize the ‘value’ of this deceptive intrusion into their public schools, to ‘sell’ them on a program they didn’t ask for and don’t want. Paying to be brainwashed so you will consent to pay more to have your children brainwashed is not a good use of tax dollars.”