What War on Women? Women Are Thriving in America 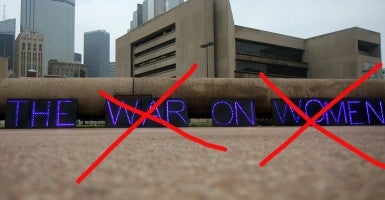 Yet too many candidates seem oblivious to the dramatic gains women have made. They’re stuck in a time warp, channeling the problems and political causes of the ’60s.

Outdated policy prescriptions intended to help women, can actually work to hurt us. It’s time politicians recognized the realities of life for American women in 2014. Here are some salient facts.

Women now have a huge edge over men when it comes to higher education. They are earning the majority of associate, bachelor’s, master’s and doctorate degrees. For every 100 degrees men got last year, women got 140.

The wage gap between men and women is now almost non-existent. Saying over and over, as the Left is prone to do, that “women make 77 cents for every dollar men make,” doesn’t make it true. When you compare men and women in similar jobs, with similar experience, education, years in the workforce and hours worked, the wage gap all but disappears.

This is especially true for the millennial generation. According to 2008 Census data, women in their 20s, living in metropolitan areas, who don’t have children, earned 8% more on average than their male counterparts.

And who increasingly controls money in America? Recent studies and census data show women control over 50% of private wealth in the U.S. and about 80% of household spending decisions. Over 40% of the 3 million Americans making over $500,000 a year are women.

That’s girl power. Unfortunately, many politicians seem to believe that the best way to win “The Women’s Vote” is to convince women that they are lagging behind, they are victims of a country that still doesn’t see them as equals, there are people out there trying to take their birth control away, and the only way to fix all this is to have government do more.

Unfortunately, the Big Government approach always brings unintended consequences. Exhibit A: the “Paycheck Fairness Act,” a bill that would establish “equal pay” for men and women — no matter their level of performance. If that law were to pass, women and men could say bye-bye to more money for raises and performance pay, as businesses will have to save up for lawsuits. For a whole slew of unintended consequences, one need only look at the “Affordable Care Act.” Millions have already had to say so long to the doctor or health plan they wanted to keep. Many who oppose abortion feel their religious freedom has been violated. As for opportunity, “Obamacare” is arguably already having a negative impact on the supply and demand for full-time workers and that will likely get worse when the law goes in to full effect next year.

Still, many liberals insist that more government is the answer to everything, and that the way to win support is to declare that conservatives are waging a “war on women.” Some, however, have dropped that terminology. According to Democratic pollster Celinda Lake,”[Saying] Republicans are waging a war on women actually doesn’t test very well…Women find it divisive, political — they don’t like it.”

Or perhaps instead of just not liking it, more women now recognize that it’s simply not true. In a recent Rasmussen poll, 52% of likely U.S. female voters said they believed the “war on women” slogan is primarily used for political purposes. And in Colorado, where one of the most closely watched Senate races is happening, a Magellan Strategies poll of female swing voters found 77% of respondents said they saw through the “war on women” messaging strategy.

Women do face challenges today – just not the ones many on the left are trying to solve via victimhood politics and policies.