All the President’s Former Men: Panetta Joins Critics of Obama Over Benghazi 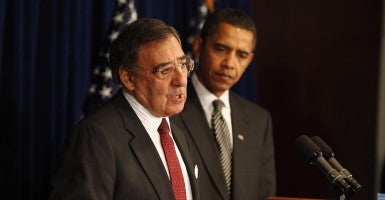 Former Secretary of Defense Leon Panetta has joined other former members of the Obama team in criticizing the president’s Middle East policy and his handling of the Benghazi attack.

In an interview with Bill O’Reilly this week, Panetta said he always thought the assault on the U.S. consulate in Benghazi on Sept. 11, 2012, was a terrorist attack and told the president this as soon as reports came into the Pentagon.

And yet, the president, Secretary of State Hillary Clinton and then-U.N. Ambassador Susan Rice proceeded to blame a sophomoric anti-Muslim video in their public statements and televised appearances.

Now more than two years after the Benghazi attack, the narrative continues to unfold of that fateful night. Officials who have been released from the muzzling effects of higher office are speaking out, and even if they are hoping to sell books—in this case Panetta’s “Worthy Fights”—that is still an acceptable activity under the First Amendment.

Panetta’s words conform to the description given to the House by Gen. Carter Ham in his testimony. Ham received the first notification at the Pentagon of the attack and immediately conveyed this to Panetta and Chairman of the Joint Chiefs Martin Dempsey, who were about to go to the White House for a 5 p.m. security briefing.

What Panetta then told the president has been an unanswered question. Panetta dodged the issue when Sen. Lindsey Graham, R-S.C., brought it up in a hearing. But if Panetta told the president a U.S. diplomatic post was under a terrorist attack, as he now claims, then a lot of other questions must be addressed.

What options, if any, did Panetta present to the president that day? What, if anything, did the president authorize Panetta and Dempsey to do that day? Most importantly, why does Panetta’s story differ so much from that of the president? Regardless of the answers, this disconnect is devastating for the president’s credibility.

The classification of the Benghazi attack remains important on several levels. For one, it is clear now the Obama administration’s refusal to accept that a resurgence of Middle Eastern terrorism was taking place led to deeply misguided policy choices in Syria, Iraq and Libya.

Second, family members of the four men who died in the attack—Ambassador Chris Stevens, Sean Smith, Glen Doherty and Tyrone Woods—have not received the treatment they deserve, from straight answers from the White House to the compensation that victims of terrorism are accorded.

Tonight the mother of Doherty will speak on Fox for the first time about the loss of her son and the frustration and pain caused by her own government, whom she is suing.