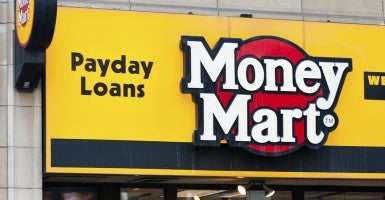 A group representing businesses that speed monetary transactions between consumers has taken a legal stand against Operation Choke Point, the secretive Obama administration effort to financially starve industries that are politically out of favor.

The Third Party Payment Processors Association filed a legal brief Friday in support of a lawsuit that challenges the Justice Department initiative’s use of federal banking regulators to pressure banks into closing the accounts of a variety of enterprises.

The lawsuit, filed by the payday lending industry, accuses three of the government’s main financial regulatory bodies—the Federal Deposit Insurance Corporation, the Federal Reserve Bank and the Office of the Comptroller of Currency—of abusing their examination authority.

Their intent, the suit says, is “to enforce a de facto boycott” of industries the Obama administration considers objectionable. Jones told The Daily Signal the trade group wanted to speak out to prevent the Justice Department from persuading the public that it targets only disreputable enterprises such as pornography, Ponzi schemes or even payday lending:

This isn’t about [only] payday lending, this is about going after third-party payment processors because it’s faster and less costly and easier than going after the bad merchants directly.

A House report concluded that the Justice Department initiative purposefully pressures financial institutions into denying legal businesses access to the very banking system they need to survive—simply because the administration doesn’t like them.

A third-party payment processor is a business—such as PayPal or a payroll depositor—that processes payments for other companies or customers through an independent bank.

The Third Party Payment Processors Association, a 30-member group that formed in 2013, says its mission is to help processors and banks operate “efficiently and compliantly” within today’s government regulatory environment.

The Justice Department, which has declined to speak to The Daily Signal about Operation Choke Point, contends that the campaign’s goal is to combat unlawful, mass-market consumer fraud.

Jones says she not only is fine with that, she’s willing to help:

Go after the bad guys—we’ll help you find them through creating best practices. But don’t use the components of the payment system to try to sweep entire industries out of business.

Pawn shops, payday lenders, gun sellers and payment processors are among the legal enterprises overtly targeted by regulators at Justice’s behest, according to lists like the one below that was posted on the Federal Deposit Insurance Corporation’s website. They asked the court to set aside “certain informal guidance documents and other unlawful regulatory actions by FDIC, the [Federal Reserve] Board and OCC on the grounds that they exceed the agencies’ statutory authority.”

In July, after coming under congressional scrutiny, the FDIC took down online lists of “high risk” businesses, citing “misunderstandings” in which its guidance led to sudden decisions by banks to close accounts with established customers that fell under one or more of the listed categories. Jones said industry experts believe the FDIC removed the lists simply as a “legal tactic,” so the regulatory agency could argue that the suit’s claims no longer apply.

Without a court ruling against the practice, she and other critics of the government program say, banks will continue shutting out “high risk” customers to avoid government scrutiny.

Otherwise, Jones said, silence “would basically be a nod to the regulators” that they have done nothing wrong.

“Operation Choke Point continues to be the greatest threat to consumer choice and freedom this country has ever seen,” said Brian Wise, senior adviser for the U.S. Consumer Coalition, a grassroots organization leading the fight against Choke Point.

“Choke Point continues to be the greatest threat to consumer choice and freedom this country has ever seen,” said Brian Wise.

In applauding the trade group’s friend-of-the court brief, Wise said he hopes the courts “uphold the standard of due process.”

The public, Wise said, should “demand that the administration, if they want to destroy an entire industry, do it through the legislative process [and] not through unilateral executive action.”

The attorney general’s power comes from the people, and we never gave him the power to shut down entire lawful industries without our consent.