Obama Is Talking, Not Acting, Like George W. Bush 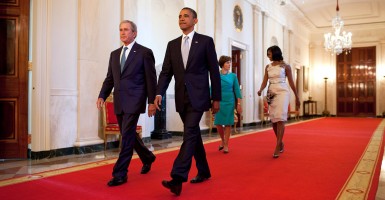 The U.S. military has officially begun airstrikes against terrorist targets inside Syria. It would be nice to think that this represents a different Obama and a more muscular foreign policy that is really serious about taking the fight to the enemy. But, there is no evidence yet that the president has turned the policy page. After all, we have seen how Obama has used force before with a half-hearted surge in Afghanistan, a half-done job in Libya and a hollow threat against Assad. What reassurance do we have that this isn’t just more of the same? It would be typical of Obama to do enough to show he is not doing nothing, but not enough to make a difference.

The man from Chicago entered the Oval Office with a clear vision for how he wanted to engage with the world. And Barack Obama has pretty much stuck to his plan ever since. But, to know that takes digging beneath the White House rhetoric.

War changes most American presidents. Not Barack Obama. He came to the office with scant experience or interest in foreign policy, but after the first two years of his term, there was little question that he was calling the shots.

At first, that didn’t seem to matter much.

One year into the Obama presidency, there seemed to be more continuity than change from the previous president’s foreign policy. He did not close Gitmo outright. He declared his intent to stay the course in Afghanistan and Iraq. The drones kept flying. In 2009, he announced he would “surge” 30,000 troops to finish the job in Afghanistan. Mr. Obama’s leadership was often derided—from right and left—as “Bush-lite.” In fact, some of those most unhappy with the president’s foreign policy had been among his strongest supporters it seemed. CODEPINK Women for Peace, for example, declared that its members were “heartbroken by Obama’s commitment to continued military aggression in Afghanistan.”

On the other hand, while Obama’s army acted like Bush-Cheney clones, his rhetoric was his own. That was abundantly clear in his landmark May 2009 speech on national security. While he began with, “Now let me be clear: We are indeed at war with Al Qaeda and its affiliates,” he also stated, “[W]e went off course.’ It was a huge departure from how the previous White House had talked about the war. The “Global War on Terrorism” rhetoric was dumped in the dustbin. The president went on to promise to stop “torture” practices, cut out dubious renditions and shutter Gitmo, along with the GWOT lingo.

The rhetoric represented the real Obama, foreshadowing the direction the president planned to take U.S. foreign and defense policy. By mid-term, the outlines of the Obama Doctrine were discernable. And, make no mistake, it was “Obama’s Doctrine.” His predilection was to be restrained, cautious, risk-averse and incremental, seeking ways to de-escalate confrontations with competitors without overtly spooking friends and allies; not appearing to disengage from the world with robust internationalist gestures and the minimum use of force required to get by.

Perhaps the first clear signal of shift was the signing and ratification of the New START nuclear deal with Russia in 2010. Where the Bush administration had a testy relationship with Moscow, Obama wanted to show where, by using accommodation and restraint, he could establish a strong working relationship with the Kremlin and “reset” Russian relations.

This initiative was followed by completing the withdrawal from Iraq in December 2011. The president also signaled his intent to press for the end of U.S. operations in Afghanistan.

Obama then moved confidently to match actions and words. That was clearly evident in the release of the administration’s June 2011 counterterrorism strategy. The strategy narrowed the mission to getting core Al Qaeda leadership and only taking on other terrorist activities if they posed a direct threat to the homeland. Basically, Obama planned to wind down his war and suppress the threats that were left with enough drone strikes to force them to keep their heads down.

The March 2011 U.S. intervention into the Libyan civil war was meant to be the signature achievement of the Obama Doctrine, demonstrating how this White House could still lead, but with a light touch.

In early 2012, the president cemented his stamp on foreign and defense policy with new “strategic guidance.” Critics quickly labeled the plan a blueprint for declining military power.

By the time the 2012 elections had rolled around, the transformation was complete. The United States was practicing Obama’s Tactics and justifying them with Obama’s Rhetoric.

But the problem with Obama’s Doctrine was that success was predicated on America’s competitors cooperating with the United States or at least being droned into docility. There were ominous signs the bad guys had figured that out—and how to exploit that weakness.

Benghazi was a transformative moment for the Obama administration—a brutal lesson of the flaws in how the White House managed the world. By the summer of 2013, it was pretty clear that Obama’s playbook wasn’t working. The president’s response, however, was to double down. The White House became even more incremental and risk-averse.

In September 2013, Obama bumbled through the Syria crisis after almost accidentally bumbling into another war.

Yet, rhetorically, Obama stuck his doctrine most famously in his June 2014 speech to the graduating class at West Point. The administration asserted the president’s way of war had made the world much safer—and America should shift its focus to fighting the really important enemies—like the weather.

In response to the ISIS challenge, the president addressed the nation, laying out a plan to take the battle to the enemy. The speech echoed with notes of the GWOT—an open-ended conflict, taking on the enemy wherever they were, for as long as it took. While Obama ruled out “boots on the ground,” he promised to roll up his sleeves and fight back.

But a careful analysis of what the president promised suggests he really doesn’t plan on doing business much differently.

So Obama has now evolved into practicing Obama’s Tactics, but in many ways returning to Bush’s Rhetoric.

This rhetorical 180 has confused many Americans, but it probably won’t make much of an impression on the rest of the world.

They are judging Obama by his actions. They can’t but conclude the president will do more of the same the next two years. Their next move will be to ponder how to exploit that impulse.