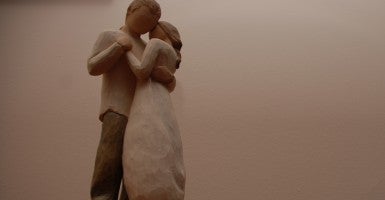 Americans’ support for same-sex marriage has decreased, according to a new Pew Research Center poll.

According to the poll, 49 percent of Americans now support same-sex marriage and 41 percent are opposed. That’s a drop of five percentage points since February. “It is too early to know if this modest decline is an anomaly or the beginning of a reversal or leveling off in attitudes towards gay marriage after years of steadily increasing public acceptance,” Pew noted.

Forty-seven percent of respondents said that businesses should be allowed to refuse to provide wedding services for same-sex couples for religious reasons, while 49 percent believe they should be required to provide these services. Also, 62 percent of Democrats said their party had done a “good job” on the issue of gay marriage, compared to 34 percent of Republicans.

And 65 percent said they thought hat gays and lesbians “face a lot of discrimination in the U.S. today.”

Ryan Anderson, the William E. Simon Fellow in Religion and a Free Society at The Heritage Foundation, is not surprised by the results of the poll.

“The argument in support of marriage as the union of a man and woman hasn’t been heard and rejected; it simply hasn’t been heard,” said Anderson. “But when it is heard, people respond accordingly. In the long run, the truth about marriage will prevail.”