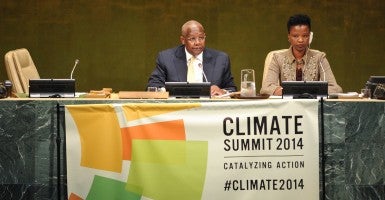 Sam Kutesa, president of the 69th session of the UN General Assembly, speaks during the Climate Summit at the UN headquarters in New York, on Sept. 23, 2014. (Photo: Xinhua/Niu Xiaolei/Newscom)

Seems world leaders are busy — too busy, in fact, to attend the U.N. Climate Change Summit in New York today.

Apparently coalition building isn’t as easy as it used to be.

The White House says addressing global warning and climate change is a top priority, but it has failed to sway some top world leaders to that point of view.

Australia Prime Minister Tony Abbot, who is coming to Washington on Wednesday to meet with President Obama, won’t make the trip a day earlier to attend the summit, “My first duty in a sense is to the Australian parliament, and that’s where I’ll be early in the week,” he said.

Our northern neighbor, Canadian Prime Minister Stephen Harper, can’t devote a whole day to it, but he will attend the dinner that evening.

Japan and Russia also are noticeably absent. My guess is Vladimir Putin is more focused on building the Russian empire than reducing carbon emissions. It’s true that more than 100 world leaders planned to attend, including British Prime Minister David Cameron. But if the goal of the summit is “to galvanize and catalyze climate action,” as U.N. Secretary General Ban Ki-moon put it, one would think you need the world’s leading greenhouse gas producers to show up.

China is the world’s leading producer of greenhouse gases, and India ranks No.3. But neither Chinese President Xi Jinping or India Prime Minister Narendra Modi will be in attendance.

They too have other priorities. As Heritage Foundation research has shown, poverty is a far larger and immediate concern for China and India than climate change.

When it comes to these two countries, Heritage expert David Kreutzer says, “Trading increased poverty for infinitesimal impacts on climate increasingly looks like a bad deal. The reality is, as the science underpinning global-warming hysteria fades, notable leaders are opting to focus on economic growth and domestic issues and skip the staged drama at the U.N.”