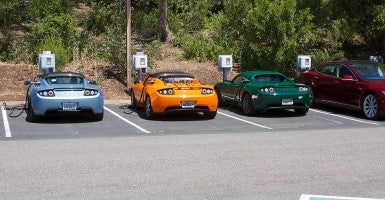 Tesla Motors CEO Elon Musk wants to sell you a car, but your state government might not let him.

Why? He wants to deal directly with you, bypassing the independent dealerships that have acted as middlemen in the car industry for close to a century.

In California’s Silicon Valley, where Tesla is based, the disruption of existing practice is encouraged. It leads to innovation and breakthroughs. But in the auto industry, Tesla has been vilified by auto dealers, who want state regulators to limit Tesla’s offerings to consumers.

Cutting out the middleman could save consumers substantially: direct sales could knock more than $2,000 off the price of a new car.

Tesla is an unlikely warrior in the fight against excessive government interference in the marketplace. Its all-electric cars have long made it a darling of the environmentalist left and the Obama administration, which provided the company a $465 million low-interest loan to develop its technology.

Nor has Tesla been shy about taking government assistance elsewhere, recently securing $1.3 billion in concessions from Nevada taxpayers to locate a battery factory near Reno.

But outside of Nevada, the firm has not received so warm a welcome. The reason is Tesla’s distribution system.

Instead of using independent dealers, Tesla sells its cars directly to the consumer, using company-owned outlets to show Tesla’s vehicles to prospective buyers, with the actual sale often occurring online.

Cutting out the middleman in this way could save consumers substantially: according to one study, direct sales could knock more than $2,000 off the price of a new car.

But cost isn’t the only reason Tesla wants to deal directly with its customers. Tesla’s electric cars are different than the vehicles consumers are used to buying and dealers are used to selling. Tesla is concerned that traditional dealerships will not have the expertise, or incentive, necessary to educate consumers about its product.

Outside the auto industry, such direct-to-the-consumer systems are nothing new – think of Apple stores or direct sale models long used by PC manufacturers Dell and Gateway.

But in the world of auto sales, they are unheard of and – dealers argue – they are downright illegal. Indeed, 48 states bar or restrict direct sales by auto manufacturers.

Citing these laws, auto dealers have fought in state after state to block Tesla from engaging in direct sales. Some dealers even question pre-sale marketing in Tesla’s showrooms.

As a result of dealer litigation and lobbying, Tesla currently is banned from selling vehicles in four states, and limited or being challenged in nearly a dozen more.

The dealers say that these restrictions are necessary to protect consumers. But from what? Price gouging by manufacturers?

Tesla is hardly in a position to “gouge” its customers. And if the concern were higher prices, why would dealers complain, since they would benefit if Tesla prices itself out of the market.

Another argument is that local dealers ensure better service for consumers, since they have more invested in the community. But Tesla has much invested as well, and wants to invest more in local communities by establishing company-owned showrooms.

In any case, if service from an independent auto dealer were so valuable to consumers, then they would have little reason to worry about Tesla’s challenge.

There simply is no economic argument for restricting direct sales. The real issue is not consumer protection, but protection of the dealers themselves. As one auto dealer in Columbus, Ohio, bluntly put it: “I don’t want ‘Hydrogen Motors’ to come along five years from now or some other Mickey Mouse thing to come along and then just jack up the industry.”

This does not mean that direct sales are necessarily a better way to sell automobiles. It may very well be that traditional independent dealerships do, in fact, offer consumers a better deal. But the choice should be up to consumers, not regulators or auto dealers. Let the competition begin.