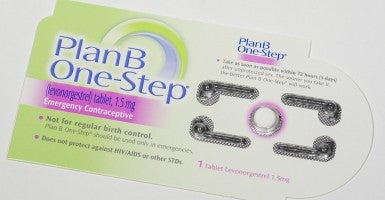 Two months after the Supreme Court handed down its Hobby Lobby decision, the Obama administration has abandoned its fight against several family businesses arguing for an exemption from the Obamacare abortion drug mandate.

Earlier this year, the businesses won temporary relief from the mandate, which they argue violates their religious beliefs. Yesterday’s decision means the administration will no longer fight the businesses in court to have the temporary stays removed.

The mandate, arising out of a section of the Affordable Care Act and implemented by the Department of Health and Human Services, requires employers’ insurance plans for workers to cover 20 potentially life-ending drugs and devices such as Plan B and Ella.

If employers don’t comply, they face fines of up to $100 per day, per employee.

On Wednesday, the Justice Department dropped its appeals in the cases of The Seneca Hardwood Lumber Company v. Burwell, Armstrong v. Burwell, and Briscoe v. Burwell. The U.S. Court of Appeals for the 3rd and 10th Circuits granted the administration’s requests Thursday. The Hahn family founded and runs Pennsylvania-based Conestoga Wood Specialties, one of the businesses challenging Obamacare’s HHS mandate. They established their business — the manufacture of custom wood kitchen cabinets and parts — on Christian values and say they’re committed to applying those values in the workplace. (Photo: Alliance Defending Freedom)

Alliance Defending Freedom, a non-profit organization, is litigating numerous lawsuits against the abortion-pill mandate. In light of the Hobby Lobby decision, Matt Bowman, the group’s senior legal counsel, said the Obama administration “was right to abandon its fight against the family businesses involved in these particular cases.”

He added, “In a free and diverse society, we respect the freedom to live out our convictions. For these families, that means not being forced to participate in distributing abortion drugs and devices.”

“In a free and diverse society, we respect the freedom to live out our convictions,” says a critic of the Obamacare mandate.

Sarah Torre, policy analyst for The Heritage Foundation’s DeVos Center for Religion and Civil Society, said Americans shouldn’t face the threat of government fines because of their deeply held beliefs.

“These family businesses who are creating jobs and serving their communities do not set aside their religious freedom when they walk through the doors of their workplaces,” she added.

Now, federal courts will continue litigation of each case to decide whether or not to eventually grant these family businesses a permanent injunction to the HHS mandate.

On June 30, in a 5-4 ruling, the Supreme Court decided the government can’t compel a “closely held” business such as Hobby Lobby to cover abortion-inducing drugs or devices in employee health plans if doing so would violate the employer’s moral and religious beliefs. Hobby Lobby already provides coverage for 16 of the 20 drugs in question.

Whether the Hobby Lobby principle will uphold in the cases of The Seneca Hardwood Lumber Company v. Burwell, Armstrong v. Burwell, and Briscoe v. Burwell, is yet to be determined.

>>> Why the Hepler Family Is Taking a Stand Against Obamacare

Correction: The businesses in question already had temporary stays against the Obamacare mandate granted by judges earlier this year.