This Obama Administration Proposal Would Effectively Authorize Some Americans Seceding 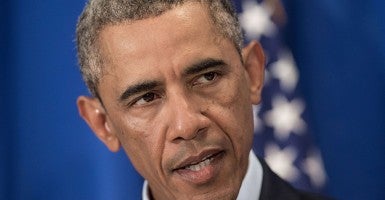 In its latest assault on the U.S. Constitution, the Obama administration is proposing to recognize so-called “Native” Hawaiians as an Indian tribe entitled to separate and become an independent sovereign and to “reestablish” a “government-to-government relationship between the United State and the Native Hawaiian community.”

Such an unconstitutional action would amount to authorizing secession for certain residents of Hawaii.

It would also implicitly authorize government-sanctioned, discriminatory conduct against any other residents who don’t meet the explicit ancestry and blood-quantum requirements to be considered a “Native.” This would balkanize Hawaii, dividing the islands into separate racial and ethnic enclaves, and undo “the political bargain through which Hawaii secured its admission into the Union.”

At the end of June, the Department of the Interior issued an “Advanced Notice of Proposed Rulemaking” that set out the administration’s plan, with the opportunity for the public to file comments ending on August 19. No doubt to its chagrin, the administration encountered strong opposition at a series of hearings the Interior Department held in Hawaii in June and July, with one official from the state Office of Hawaiian Affairs being loudly booed when she declared her support for the plan.

From a constitutional standpoint, the administration has no legal authority to implement its proposal. Only Congress, not the president, has the authority to recognize Indian tribes under Article I, Section 8. Congress has specifically refused to provide that authority. For more than a decade, former U.S. Sen. Daniel Inouye, D-Hawaii, and Sen. Daniel Akaka, D-Hawaii, tried unsuccessfully to convince Congress to pass the Native Hawaiian Recognition Act, which would have provided such recognition.

In fact, as recently as a year ago, the head of Indian Affairs at the Interior Department, Assistant Secretary Kevin K. Washburn, told a House subcommittee that the administration did not “have the authority to recognize Native Hawaiians.” Washburn told the subcommittee that “we would need legislation to be able to proceed down that road.” Yet, suddenly, the administration is proceeding down the very road that it admitted it lacks the authority to travel.

Hawaii’s own former attorney general, Michael Lilly, says that any effort to recognize Hawaiians as an Indian tribe is unconstitutional, because so-called Native Hawaiians don’t meet any of the political requirements necessary for such recognition. Hawaii went from being an independent kingdom to a territory to a state and four commissioners from the U.S. Commission on Civil Rights have told President Obama that neither Congress nor the president can “reconstitute a tribe or other sovereign entity that has ceased to exist as a polity in the past.” In other words, there is no Native Hawaiian government with which the administration can establish a government-to-government relationship because “it is an extinguished government, and therefore, no government at all.”

The Hawaiian state government already provides special benefits to Native Hawaiians, who are defined as “any descendant of not less than one-half part of the blood of races inhabiting the Hawaiian Islands previous to 1778.” As one commissioner has commented, this definition is similar to “the odious ‘one drop rule’ contained in the racial-segregation codes of the 19th and early 20th centuries.” The U.S. Supreme Court has called such ancestry definitions a proxy for race and held that they are discriminatory and a violation of the Fifteenth Amendment. In the past, the U.S. Justice Department has consistently taken the same position.