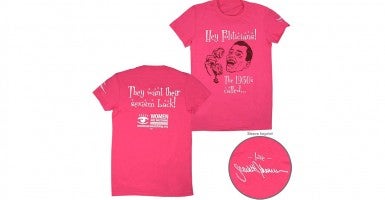 The front of the pink t-shirt reads “Hey Politicians! The 1950s called…” and the back reads, “They want their sexism back!”

“When I heard that some politicians were cheering the Supreme Court’s decision to give bosses the right to interfere in our access to birth control, I thought I had woken up in another decade,” explained Johansson in a statement.

“Like many of my friends, I was appalled by the thought of men taking away women’s ability to make our own personal health care decisions,” she added.

Let’s look at some facts, beginning with that the Hobby Lobby decision was fairly narrow. As Heritage policy experts Sarah Torre and Elizabeth Slattery explained, the decision didn’t strike down the Department of Health and Human Services Obamacare mandate that forces business to provide insurance coverage for twenty abortion-inducing drugs and birth control devices. “The Court did not strike down the mandate,” write Torre and Slattery, “but said that the government cannot force these two family businesses that object to providing coverage of four potentially life-ending drugs and devices to comply with the mandate.”

So, if you’re an employee at Hobby Lobby, you still have insurance coverage for sixteen different types of birth control. That’s hardly limited access to birth control.

But let’s consider the overall logic of Johansson’s t-shirt: Does she seriously mean to imply that if an employer doesn’t pay for something, an employee doesn’t have access to that thing?

I’ve never worked for an employer that provided a stipend specifically earmarked for housing or food – but I wouldn’t claim that all my employers have limited my “access” to housing or food. I accepted the salary they offered, and it was my choice whether to spend that money on housing, food, or even abortion-inducing drugs.

And it’s insane to call a decision that many women support an example of “sexism.” Nothing in the Hobby Lobby decision prevents women from making their “own personal health care decisions.” Instead, it protects the religious liberty of male and female business owners who don’t want to be forced to act against their beliefs by providing insurance coverage of drugs such as those that induce abortions.

I don’t know about Johansson, but I like living in a decade where the government doesn’t force women business owners to act against their beliefs.