Why Some Pro-Lifers Go Cold on ALS Ice Bucket Challenge 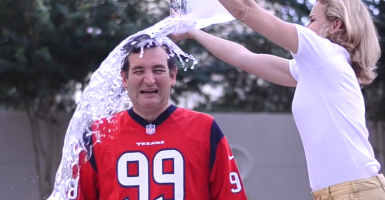 Some of Pell’s friends did, too.

“You don’t have to hurt a life to save a life,” Pell told The Daily Signal.

Pell, whose 9-year-old daughter has special needs, acknowledges that the ALS Association didn’t claim not to support any tests using embryonic stem cells.

But, she says, “we just didn’t realize that they did.”

Since the July 29 onset of the now-famous Ice Bucket Challenge, the ALS Association now has raised more than $60 million in donations to fight amyotrophic lateral sclerosis (ALS) – known as Lou Gehrig’s disease.

Putting a damper on the “unprecedented generosity” generated from the viral challenge, some pro-life organizations including the Family Research Council have advised care before making an ALS donation.

The concern: The ALS Association, a Washington-based nonprofit that funds global research to find treatments and a cure for ALS also supports some research using embryonic stem cells.

For some who oppose abortion, the controversy is that there often is no way of knowing where the stem cells came from — and whether it required the destruction of what many consider an innocent human life.

The Cincinnati Archdiocese last week asked Catholic school principals not to encourage students to donate to the ALS Association because of “moral” concerns. Instead, the archdiocese called for Ice Bucket Challenge participants to direct donations to the John Paul II Medical Research Institute in Iowa City.

We appreciate the compassion that has caused so many people to engage in this. But it’s a well-established moral principle that a good end is not enough. The means to that ends must be morally licit.

In response to questions from The Daily Signal, the organization pointed to a prepared statement that the charity is  committed to “leaving no stone unturned” in the quest to discover a cure for Lou Gehrig’s disease, which includes such research.

Information about embryonic stem cell research is available on the ALS Association website, although it takes some digging to find.

ALS Association spokeswoman Carrie Munk told The Daily Signal that if the group’s research avenues are not clear, “it’s certainly not intentional.”

The organization primarily invests in adult stem cell research, Munk said, although it now funds one project that uses embryonic stem cells. Of it, the charity discloses:

Currently, the association is funding one study using embryonic stem cells, and the stem cell line was established many years ago under ethical guidelines set by the National Institute of Neurological Disorders and Stroke (NINDS). This research is funded by one specific donor, who is committed to this area of research. In fact, donors may stipulate that their funds not be invested in this study or any stem cell project.

If donors don’t stipulate where their financial gifts should be invested, there’s no guarantee their money won’t be funneled toward future studies involving embryonic stem cells.

Pell said she blames herself for at first overlooking the specific types of research funded by the ALS Association.

“It’s my fault because I’m an adult and I didn’t look into it,” she said.

Eugene Tarne, a senior analyst at the Charlotte Loizer Institute, said it’s a “legitimate” concern that donor money might go to such research:

If the ALS Association, and other organizations like it, choose to use donor money to fund research projects, I think it would be the right thing for them to make clear whether or not they are involved in human embryonic stem cell research — and not in a way you have to spend a half hour searching for it on their websites.

Tarne, who has studied human life issues for more than 10 years, also said science is moving away from embryonic stem cell research:

It would seem puzzling for the ALS Association to do so, given that non-embryonic stem cell research — using adult and induced pluripotent stem cells (iPSCs) — seem to be showing the most promise for bringing therapeutic benefits to patients.

Pell, the Manassas mother, said she decided to donate instead to other charities whose research doesn’t rely on embryonic stem cells.

“We’re not going to support little lives being destroyed,” she said.

More than 635,000 new donors were attracted to the organization because of the Ice Bucket Challenge.  With donors as diverse as Derek Jeter, Jon Bon Jovi  and George W. Bush, those numbers likely will continue climbing.

For those concerned that  it wasn’t clear their donations could go toward  research involving embryonic stem cells, Munk said it’s not too late to email, call or write a letter requesting that not occur.

Once the hype of the Ice Bucket Challenge dies down, the organization plans to review policies to “see what we can do better,” she said:

We’ve never seen this kind of volume before. There’s probably a lot of things we’re going to be looking at, including our website content and the donation process.