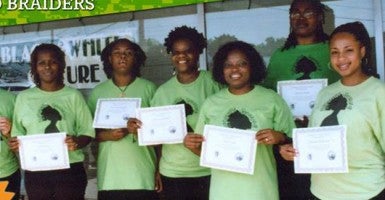 All Melanie Armstrong wanted to do was braid women’s hair for a living.

African hair-braiding is not easy, but it is not medicine, law or engineering, where mistakes can cost lives. It is a skill that can be learned in a relatively short time and that empowers women to set up their own businesses and earn their own living.

Only in Mississippi, it was more complicated than that. There, Armstrong was required to obtain 3,200 hours of training, which is more than the training needed to be an emergency medical technician, ambulance driver, law enforcement officer or firefighter.

So she took the state to court. With the help of the Institute for Justice, she challenged the state’s licensure requirements for African hair braiders and showed them to be more about preventing competitors from entering the market than keeping Mississippians safe in any way.

With the victory in hand, Armstrong not only went about braiding hair but teaching others to do it as well. “I’ve transformed the lives of hundreds of poor women in my state of Mississippi,” she said. “Not because I sought out government assistance; rather, because I asked the government to get out of my way.” She even testified before Congress in March about how she won the right to train impoverished women in her community in the skill of African hair-braiding.

It’s not just Mississippi. Nivea Earl, a young Arkansas entrepreneur, faces similar barriers after being told she would have to spend thousands of dollars in cosmetology training to keep her hair-braiding business. “I would like to see the laws in Arkansas change so I can earn an honest living,” she told the Institute for Justice in a June 17 news release. Her occupation “does not involve cutting people’s hair, or chemicals. It is perfectly safe.”

Hair-braiders are not the only Americans to face stringent licensing regulations designed more to restrict them from entering the market than to assure anyone’s safety. Florists, interior designers, tour guides, teeth whiteners, manicurists and auctioneers face similar or greater barriers.

For instance, teeth-whitening entrepreneur Trisha Eck received a cease-and-desist order in March threatening felony charges, prison and fines, although, as Institute for Justice said, the ban imposed by dentists’ monopolies in Georgia and North Carolina had “nothing to do with health or safety and everything to do with protecting dentists from honest competition.”

Excessive license requirements hurt the poor most. They mean higher costs—occupational licensing raises consumer prices by an estimated 15 percent (and the wages of professionals already in the field by 17 percent)—and they limit access to services and jobs.

For example, South Carolina attempted to offer teeth cleaning to underprivileged children through a school program. But the state’s Board of Dentistry’s requirement that teeth cleanings be accompanied by exams from a dentist undermined the program. Teeth whitening costs five times more if a dentist does it than an independent entrepreneur. IJ’s License to Work study shows that many of the 102 most-restricted occupations require entrants to complete 12th grade, which prevents 15.7 percent of low- and middle-income workers from finding jobs in those fields.

If these restrictions truly sought to protect consumers, the policies enacted by state legislatures would be more uniform. Instead, a smorgasbord of different license requirements creates extra confusion for entrepreneurs. For instance, auctioneers need 100 days of training in 33 states, but in five states, they need two years of education. Half the states have banned independent teeth whiteners. For manicurists, training requirements vary widely, but only one-third of the training is related to health and safety.

A number of studies have established that states that reduce these unproductive regulations perform better economically. But for those unmoved by the prospect of more jobs and better pay, courts are coming to the rescue.

In October 2013 the Supreme Court lifted a ban that prevented monks at St. Joseph Abbey near Covington, La., from manufacturing caskets unless they became licensed as official funeral directors. This fall the Supreme Court will hear North Carolina Board of Dental Examiners v. FTC,which will determine whether the board can prevent non-dentists from running teeth-whitening businesses. The ruling could affect the ability of dental clinics to reach impoverished communities.

Expanding access to these markets creates opportunities not just for U.S. entrepreneurs but for others across the world. Like Armstrong, Essence China fought a battle to open her natural hair-braiding salon in Phoenix. “Since winning, Essence has opened up a second shop and is now employing twice as many braiders,” said small-business owner Taalib-Din Uqdah, whose Washington, D.C., salon has employed hundreds of women in hair-braiding since he and his wife fought the legal battle necessary to open it 25 years ago.

Armstrong now plans to teach disadvantaged women in Togo how to braid and thus earn livelihoods for their families. Unmoored from unnecessary regulations, she is now expanding prosperity not just in Mississippi but half a world away.