The Government Should Let Americans Control More of Their Retirement Savings 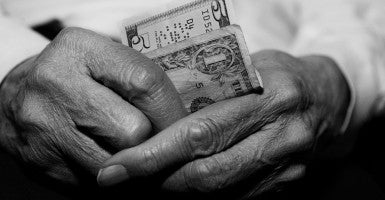 A new survey suggests that the vast majority of workers consider retirement their own responsibility.

The LIMRA Secure Retirement Institute reports that 78 percent of workers recognize their personal responsibility to save for retirement. Among those already contributing to a defined contribution (DC) plan, like a 401k or IRA, 84 percent believe they are personally responsible for retirement saving.

Some who lament the decline of defined-benefit pensions, which are pensions that guarantee someone a set amount regularly, in America have suggested increasing the role that the government plays in providing income for retirees. They propose expanding the already overwhelmed Social Security system, which despite taxing all workers 12.4 percent on their incomes (up to $117,000; including the employer share) a year is faced with permanent and growing deficits. Just maintaining current benefit levels for all eligible retirees would require raising the Social Security payroll tax immediately and permanently by 3.3 percentage points, increasing the current tax burden by nearly 27 percent.

Yet even if government retirement benefits could be expanded in a fiscally responsible manner, Americans’ overwhelming awareness of their personal responsibility to provide for themselves in their retirement suggests lawmakers should pursue a different course of action.

There are several reforms Congress could make to help more Americans provide for a greater portion of their retirement needs through their own savings.

Reform Social Security. Lawmakers should reform the Social Security program so it provides real insurance for Americans, ensuring that no senior who worked for 35 years falls into poverty at retirement. A predictable, flat benefit above the poverty level should focus on those Americans who need it the most, recognizing that those with higher incomes are better able to provide for their own needs. Absent changes to benefits, the program will consume an even greater share of worker’s incomes, leaving fewer dollars for them to save for their own needs and enjoy the benefits of seeing their savings grow over time. Instead, lawmakers should avoid payroll tax increases so workers are able to control more of their own retirement savings.

Expand Private Retirement Savings. The LIMRA survey also shows that 77 percent of working Americans believe all workers should have access to retirement savings plan at work because they are an effective way to save for retirement. Payroll-based savings is the key to enabling many more Americans to participate in building resources for retirement. The bi-partisan Auto-IRA would help millions of American workers build a nest egg with every paycheck. As David John, one of the plan’s creators, described it in testimony to Congress:

“Making saving easier by making it automatic has been shown to be remarkably effective at boosting participation in 401(k) plans, but they are of no use to the millions of US workers who are not offered a 401(k) or any other type of employer-sponsored plan. We could and should extend the benefits of automatic saving to a far wider array of the population by combining several key elements of our current system: payroll deposit saving, automatic enrollment, low-cost, diversified default investments, and IRAs.”

The vast majority of American workers feel responsible to provide for their own retirement. Congress should protect workers from higher taxes which would eat away at their income available for spending and saving and enable more Americans to control more of their own retirement dollars.