The U.S. Needs to Be Prepared for Next ‘Wave’ of Terrorism 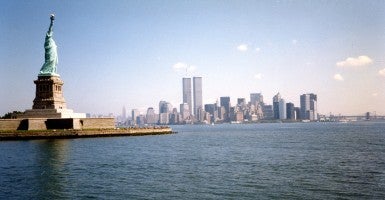 Things seem to go from bad to worse in the blood-soaked Middle East, Civil war still rages in Syria, even as ISIS gobbles up swaths of Iraq and Syria.

After years of war in Iraq and Afghanistan, many Americans are tempted to wash their hands of the region. But that would be a huge mistake. What happens in those far-off lands can have a huge impact here at home.

The conflict roiling Syria and Iraq will not stay confined within those borders for long. The warring parties have global plans and ambitions.

Al Qaeda and ISIS have diligently recruited U.S. and European citizens to fight in the Middle East. U.S. officials report at least 70 Americans are currently fighting for these Islamist groups in Syria or Iraq. Just last May, a U.S. citizen, Moner Mohammad Abu-Salha, conducted a suicide bombing in Syria. Earlier this month, the FBI arrested a Colorado woman seeking to join ISIS and wage jihad. British officials are even more worried. A large number of jihadis have already returned home to the U.K. from the killing fields of the Middle East.

And this is the great worry of Western nations. As terrorists return home, they are likely to bring with them a desire to continue their “holy war” against values that we hold dear. The former head of NATO, Admiral James Staviridis warned this month “ISIS ‘jihadists’ will target western nations next.” U.S. Secretary of Homeland Security Jeh Johnson and other U.S. intelligence officials also have spoken openly of the danger returning terrorists pose to the U.S. and our allies.

Certainly Western-born terrorists are committed to waging jihad, and many will have the opportunity to return home and attack. But will they have the means? Airport security is difficult to bypass, but terrorists are looking for ways around it – and they may have found it with the help of Ibrahim al Asiri, arguably the best terrorist bomb-maker in the world.

Asiri has been working on undetectable bombs for years now. He is credited with the underwear bomb in 2009 and has been testing out bombs that are put inside a bombers body. These new “human bombs” are a security nightmare, as they supposedly contain no metal, making them almost impossible to detect. The potential of such weapons was proven when Asiri’s brother, bearing an implanted bomb, passed through a metal detector to meet with a Saudi prince.

Luckily, that suicide bombing failed to kill the prince. Not so lucky: reports that these terrorists are collaborating with Asiri to create advanced bombs and improvised explosive devices.

This is why the U.S. has started extra security procedures at overseas airports and is working overtime with allies to share intelligence and prevent for the next airplane terror plot. But aircraft incidents aren’t the only options for making mischief available to jihadis returning from Syria or Iraq. They can simply re-enter their homelands unarmed – and then set to work plotting attacks.

It is time for the U.S. to reapply itself to homeland security. While we have made great strides since 9/11, the threat of terrorism remains. The Heritage Foundation has been tracking Islamist-inspired terror plots since 9/11, with the total now standing at 61 plots or attacks. The U.S. must maintain and improve effective counterterrorism and intelligence polices that stop terrorists before they attack. Indeed, such tools are absolutely critical if body scanners cannot detect new bombs.

The danger of terrorism spilling over from the Syrian Civil War and ISIS also shows the importance of remaining engaged abroad. The Obama administration has largely ignored the Syrian conflict and has done everything in its power to distance itself from Iraq. Now those decisions have left the U.S. with little influence and few viable options for dealing with these conflicts.

When the U.S. turns its back on the world, terrorists seize the opportunity and nations like Russia and Iran take advantage of American weakness. Just because we don’t want to engage or fight, doesn’t mean the enemy feels that same. Indeed, it merely emboldens him.

Meanwhile, the U.S. must prepare for the next wave of terrorism. The last time America ignored the problems of global terrorism, planes crashed into the Twin Towers, the Pentagon and a field in Pennsylvania – and the enemy still wants to bring the war back to our homeland.

Originally posted on The Fresno Bee.