The U.S. Should Dismiss UNHCR Opinion That the Migrants Are Refugees 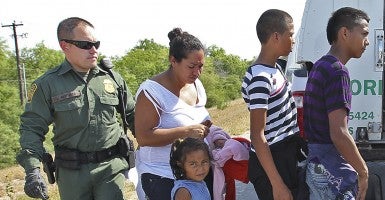 Should the Central American migrants crossing our border be treated as refugees?

Recent statements in the press by officials of the United Nations High Commissioner for Refugees indicate the agency thinks they should.

But as the administration and Congress struggle to find common ground on resolving the crisis, the UNHCR officials’ views simply add another point of contention to an already heated political discussion. And, if the U.S. government chooses to follow this advice, it would complicate efforts to resolve the crisis quickly.

Current U.S. policy regarding refugees is consistent with the 1951 Convention Relating to the Status of Refugees. Under the terms of the 1951 treaty and its 1967 Protocol relating to the Status of Refugees, which the U.S. ratified in 1968, if the migrants are granted refugee status, the U.S. would have to provide them with a number of privileges. These include the ability to work, freedom of movement and a prohibition on expulsion “save on grounds of national security or public order.” The U.S. also would be expected to facilitate the assimilation and naturalization of refugees and, according to the principle known as non-refoulement, not return them to persecution.

Thus, if the U.S. accepts the UNHCR recommendation to regard the migrants as refugees, it most likely will lead to their enduring residence in the U.S.

Moreover, it is a stretch — to say the least — to classify the migrants as refugees. The 1951 treaty defines a refugee as a person “owing to a well-founded fear of being persecuted for reasons of race, religion, nationality, membership of a particular social group or political opinion, is outside the country of his nationality, and is unable to, or owing to such fear, is unwilling to avail himself of the protection of that country.” The U.S. definition is nearly identical. Neither definition includes people fleeing poverty or criminality, as is the case for the Central American migrant surge currently occurring at the border.

Also, according to U.S. Citizenship and Immigration Services, under U.S. law a refugee is “someone who is located outside the United States.” Thus, the illegal immigrants currently in the U.S. more appropriately would be seeking asylum. But this status also is restricted to those who meet the definition of refugee, i.e. those fleeing persecution. Most of the migrants do not fall into this category.

In brief, U.S. law is consistent with the U.N. treaty on refugees, and the Central American migrants overwhelmingly fail to meet the legal definitions of refugee or asylum seeker.

Although it admits its opinion holds no legal weight, UNHCR stated that it wants “the U.S. and Mexico [to] recognize that this is a refugee situation, which implies that they shouldn’t be automatically sent to their home countries but rather receive international protection.” But U.S. law already protects those who genuinely are refugees as well as the victims of human trafficking. The current debate is over how long that determinative process takes and what can be done to expedite it and quell the surge.

Obama administration statements and executive decisions to not enforce various parts of immigration laws, such as the administrations “Deferred Action for Childhood Arrivals,” have encouraged the increase in illegal immigration by causing potential immigrants to believe children and families will be granted permanent U.S. residence or citizenship. Even those who dispute this argument would have to admit that granting Central American migrants refugee status would make the perception reality.

The UNHCR statements are unhelpful and contribute little to resolving this situation. If UNHCR or other UN officials persist in inserting themselves into U.S. policy deliberations over how to address the migrant crisis on the border, particularly if they continue to insist the migrants are refugees, Congress should respond by paying for the expenses of addressing the “refugee” situation by repurposing dollar-for-dollar U.S. contributions to the UNHCR ($1.04 billion in 2013) and the UN Relief and Works Agency for Palestine Refugees in the Near East ($294 million in 2013).