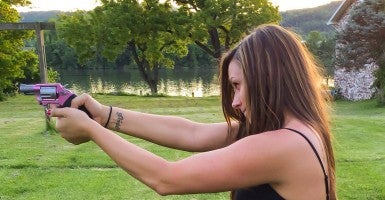 Holly Fisher, also known as Holly Hobby Lobby, is not afraid to return fire -- but with more civility than the 'tolerant left.' (Photo: Facebook)

To show support for the recent  Supreme Court decision in the Hobby Lobby case, Holly Fisher – aka “Holly Hobby Lobby” – posted a photo of herself wearing a “pro-life” T-shirt and holding a Chick-fil-A cup in front of one of the arts-and-crafts chain’s locations in West Virginia. The Army wife and mother of three became an instant Internet sensation, attracting intense attention from both sides of the debate over Obamacare, abortion, and religious freedom.

ATTENTION LIBERALS: do NOT look at this picture. Your head will most likely explode. #HobbyLobby #UniteBlue pic.twitter.com/uAIZji25vS

Herman Cain, the talk show host and former presidential candidate, was among those re-tweeting the post.

Send this photo to liberal friends . . . and watch their heads explode http://t.co/sXc9TSd0iC

Within hours, Fisher’s picture went viral on Twitter, garnering thousands of hateful comments — many, unlike the satire below from @DemocratInsider, too vulgar or obscene to repeat here.

Right wing whore "@HollyRFisher: Biggest complaint I'm getting about my #HobbyLobby pic is there's no gun, bible, or flag….

At first, Fisher decided to stay above the fray.

I don't do personal attacks, but sometimes I wish I did. I have some really hilarious comebacks that stay in my brain all sad.

Then, per a suggestion, Fisher decided to take it one step further.

Biggest complaint I'm getting about my #HobbyLobby pic is there's no gun, bible, or flag. Tried to make up for it ???? pic.twitter.com/YneQ9Dkkxi

Some critics on Twitter began calling her “the new face of the American Taliban.”

Others referred to her as a “Jihad Barbie.”

But being a soldier’s wife, Fisher found offense in this accusation, and responded with this:

I'm not a terrorist, but my husband has killed a few. #ftw

Many came to Fisher’s defense, some taking the time to visually illustrate the difference between her and international Islamist terrorist Sherafiyah Lewthwaite (right), commonly known as “The White Widow.”

To all who lack the common sense to know the difference between a terrorist and an American, @HollyRFisher: pic.twitter.com/tW4ZajA7Kp

Others weren’t so crafty with their critiques.

You've got a lot of nerve @HollyRFisher I wish you nothing but blacks, Jews, gays, Latinos, and nonetheless many days of happiness! ??

Some sympathetic observers on Twitter didn’t like the disparaging comments about Fisher (many too vulgar for The Daily Signal to publish), and stood up for Holly Hobby Lobby.

@HollyRFisher I think you are brave and it's really about time people started standing up for their beliefs and not stand quietly! Go Holly!

Now, she even has her own hashtag, #IStandWithHolly.

“I have always been extremely conservative and passionate about my views,” Fisher told Inquisitr.com when asked why she originally tweeted the Hobby Lobby photo. “The last few years of the growing hate and intolerance among the ‘tolerant’ left has made me want to stand up and speak out.” She added:

I saw this as a perfect opportunity to show where I stand. I didn’t do it to try to change minds of those who disagree with me, but more so to show like-minded people that they’re not alone and it’s OK to stand up for what you believe in, even if it’s not popular right now. I want younger Americans to know it’s OK to not follow the current liberal path.