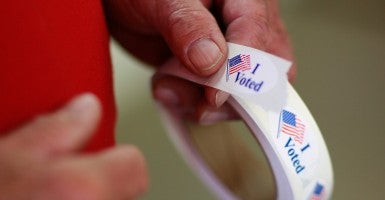 Some 6.9 million Americans are registered to vote in two or more states, according to a report from an election-watch group.

“Our nation’s voter rolls are a mess,” says Catherine Engelbrecht, True The Vote president. “Sensible approaches to roll maintenance are fought tooth and nail by radical special interests who can use the duplicity in the system to their advantage.”

The cross-check program involves only 28 states and does not include the three largest: California, Texas and Florida.

“Duplicate registration is an open invitation to voting fraud,” said Clara Belle Wheeler, a member of the Election Board in Albemarle County, Va. “This ability to vote more than once dilutes the legal votes and changes the results of elections.”

The interstate cross-check program matches first and last names and dates of birth to identify multiple registrations. But the data are not routinely used to purge duplicates.

“The few conversations that are had about how to shore up these weaknesses are immediately seized on by certain politicians and special-interest groups as fuel to further divide American voters based on trumped-up race and class-based narratives,” she said.

Engelbrecht said the “vicious cycle” can be fixed “if citizens wake up, stand up and refuse to settle for a broken system.”

Jay DeLancy, executive director of the Voter Integrity Project of North Carolina, says the solution is as simple as one-two-three:

First, tie registrations more closely to [each state’s] Department of Motor Vehicles. All voter ID cards would originate there. As is today, when we get an ID card from DMV, we get registered to vote—but turning in your former state’s ID card should revoke your right to vote in the state that issued it.

Second, make it a felony to possess a voter ID card—or any other DMV-issued ID card—from more than one state.

Third, we would only be allowed to vote from the address on that ID card. If a voter shows up with the wrong address, the vote is provisional until the card is corrected.

He added: “We don’t need a federal ID card to do this. In fact, it wouldn’t require any more feds to be hired.”

States, however, will have to tighten up. And that could be a challenge—both politically and fiscally.

>>> Voter ID: Protecting the Integrity of Our Elections

In Virginia, Wheeler noted that the State Board of Elections and Department of Elections “have had their funding reduced greatly by the [Terry] McAuliffe administration.” McAuliffe, a Democrat, took office in January.

“With reduced funding, they have a grossly limited staff and thus, will be greatly limited in the ability to do the cross checks and reduce voter fraud.”

State Board of Elections officials, who provided the cross-check data in response to a Freedom of Information Act filing by the Virginia Voters Alliance, did not respond to Wheeler’s assertion.

Two national voting-rights groups — the League of Women Voters and America Votes — did not respond to requests for comment.