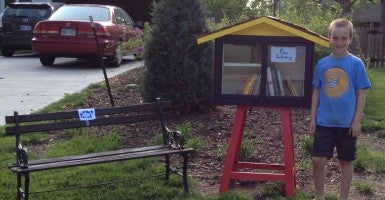 Collins worked with his father and grandfather to build the library as a gift to his mother on Mother’s Day. (Photo: Spencer's Little Free Library via Facebook)

Check the regulations: You may be in violation of a city ordinance if you decide to share your books with friends and neighbors. For 9 year-old Spencer Collins of Leawood, Kansas, it meant receiving a government citation for doing just that in his front yard.

It all started with Spencer’s plan to create a little free library in front of his house. With the help of his father and grandfather, he built a small bookcase to allow neighbors to freely borrow and exchange books. This concept has been widely promoted by the non-profit group Little Free Library as a community movement to encourage literacy and a love of reading. According to Little Free Library, there are around 15,000 little libraries all over the world.

This project was especially significant to Spencer, because he built it as a gift to his mother.

Spencer told Fox4kc he wanted to build a little free library in his family’s front yard as a surprise Mother’s Day gift. “Reading is one of my favorite things to do. We built it on Mother’s Day as a present for my mom because she really wanted one.”

The City of Leawood had other plans.

After returning from vacation, the Collins family found a letter from the Leawood City Codes Enforcement Office warning that if the little library was not removed from the front yard, they would be issued a citation. According to the City of Leawood, local ordinances prohibit detached structures on single-family homes.

The relevant portion of Section 16-4-2.2 of the Leawood Development Ordinance states: “No detached structure including garages, barns, sheds, greenhouses, above ground pools, or outbuildings, shall be permitted, unless expressly allowed by this Ordinance.” Inexplicably, the code enforcement office believed the ordinance prohibits a bookcase despite the fact it does not fall within the definition of the ordinance. Consider: Each item mentioned in the ordinance could hold a person. A bookcase cannot. Spencer could have used a box to hold his books. A box would have four sides and maybe a top but could not reasonably be deemed a “structure.” If so, Spencer also should have been able to use a bookcase. It has three sides and a top but no front. That difference is immaterial. In fact, if Spencer laid his bookcase on its back, it would not differ at all from a box.

Richard Coleman, the Leawood director of community development, said the law must be strictly enforced against Spencer Collins and his family because, as he told told KMBC, “We need to treat everybody the same. So we can’t say if somebody files a complaint but we like the little libraries—we think they’re cute—so we ignore it. We can’t do that.”

This is not the first time local government regulations have interfered with little free libraries.

In Wisconsin, Avi and Dannette Lank decided to check with their local government before building a little free library on their private property. Officials from the Village of Whitefish Bay denied them permission to build, citing the need to comply with ordinances which prohibited structures such as mailboxes from being built in residential areas.

The village even went so far as to demand that a local church remove its little free library.

Christ Church of Whitefish Bay had built a library on its property, but pressure from the village resulted in Rev. Dietrich’s decision to tear down the structure. After significant backlash from the public, the village passed an amendment to accommodate little free libraries for residents who wished to build one.

Government regulations are extensive, and citizens are often unaware they might be in violation of the law—even for something as minor as building a little library in their front yard. The expansive nature of government regulations should give cause for concern about the level of intrusion into the private lives of citizens, and increase scrutiny into how laws are enforced.

If Spencer took the issue to court, his First Amendment rights certainly would come into play since this ordinance prohibits his ability to share and disseminate information on his private property. How differently would the city have treated this young boy if he had simply stood out on his front lawn holding the books in his arms for neighbors to borrow, instead of the little library he built to accomplish the same purpose?

For Spencer Collins, the joy of reading will not end simply because of threats from the government. He plans to challenge the ordinance in City Hall and advocate for the creative power of reading to be shared with local neighborhoods and communities. Let’s hope he (and common sense) prevail.

You can check out his official Facebook support page to view pictures of his little free library and receive updates as this story develops.