The Latest Allegations in Wisconsin Are Much Ado About Nothing 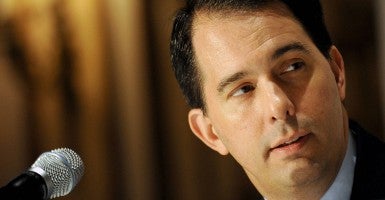 Today’s revelations about local prosecutors’ claims that  Wisconsin Gov. Scott Walker “was at the center of an effort to illegally coordinate fundraising among conservative groups” in a “criminal scheme” are much ado about nothing.

Why? Because federal district court Judge Rudolph Randa already enjoined the prosecutors’ investigation, saying they were trying to criminalize the political speech of the governor and conservative organizations in violation of the First Amendment.

In fact, Judge Randa called the prosecutors’ appeal of his injunction order “frivolous.” Despite the excitement by some over the fact that amongst the documents unsealed today by a federal judge is an email from Gov. Walker to Karl Rove, Judge Randa said in a previous order that the prosecutors’ interpretation of the law was “simply wrong,” noting that the prosecutors were “pursuing criminal charges against the plaintiffs for exercising issue advocacy speech rights that on their face are not subject to the regulations or statutes the defendants seek to enforce.”

What these unsealed documents provide is simply more evidence that local prosecutors were attempting to prosecute First Amendment-protected activity—specifically political speech on issues—by conservative organizations and to curtail the speech of someone they considered a political enemy.  As Wisconsin Club for Growth’s attorney, Andrew Grossman, said, what these documents actually show is how local prosecutors “adopted a blatantly unconstitutional interpretation of Wisconsin law that they used to launch a secret criminal investigation targeting conservatives throughout Wisconsin.”

There is nothing illegal about coordinating political speech on important issues. As the Milwaukee Journal Sentinel points out, in January another judge, Gregory Peterson, also quashed subpoenas the prosecutors sought because as the judge said, “coordination by candidates and independent organizations” is prohibited only when it involved express advocacy on behalf of candidates. According to Judge Peterson, there was “no evidence of express advocacy.” In other words, Walker and conservative groups were free to coordinate on the important issues Wisconsin was dealing with, from its looming budget deficit to limitations on public sector unions that Walker successfully pushed through the state legislature.

In short, there was no “criminal scheme,” there was no violation of the law, and the prosecutors had no basis for pursuing their investigation, which was a fishing expedition that violated the most basic norms of the Bill of Rights.