The Surprising States That Have Greater Income Inequality 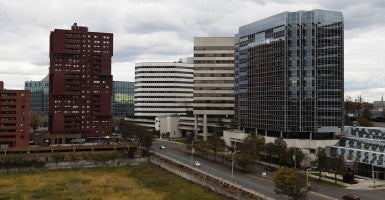 Richard Vedder, a professor of economics at Ohio University, is the co-author with Lowell Gallaway of "Out of Work: Unemployment and Government in Twentieth-Century America."

For those in Washington obsessed with reducing income inequality, the standard prescription involves raising taxes on the well-to-do, increasing the minimum wage, and generally expanding government benefits—the policies characterizing liberal, blue-state governance. If only America took a more “progressive” approach, the thinking goes, leaving behind conservative, red-state priorities like keeping taxes low and encouraging business, fairness would sprout across the land.

Among the problems with that view, one is particularly surprising: The income gap between rich and poor tends to be wider in blue states than in red states. Our state-by-state analysis finds that the more liberal states whose policies are supposed to promote fairness have a bigger gap between higher and lower incomes than do states that have more conservative, pro-growth policies.

The measure has some obvious flaws: If everyone is doing better but some get richer at a faster pace, the Gini coefficient will increase, and so rising prosperity and economic progress will look like retrogression. Still we used it in our analysis, since it is the favorite measure among advocates of greater equality and the stick used to beat free markets. Conveniently, the U.S. Census Bureau annually calculates the Gini coefficient for the 50 states and the District of Columbia.

According to 2012 Census Bureau data (the latest available figures), the District of Columbia, New York, Connecticut, Mississippi and Louisiana have the highest measure of income inequality of all the states; Wyoming, Alaska, Utah, Hawaii and New Hampshire have the lowest Gini coefficients. The three places that are most unequal—Washington, D.C., New York and Connecticut—are dominated by liberal policies and politicians. Four of the five states with the lowest Gini coefficients—Wyoming, Alaska, Utah and New Hampshire—are generally red states.

Do the 19 states with minimum wages above the $7.25 federal minimum have lower income inequality? Sorry, no. States with a super minimum wage like Connecticut ($8.70), California ($8), New York ($8) and Vermont ($8.73) have significantly wider gaps between rich and poor than those states that don’t.

What about welfare benefits? A Cato Institute report, “The Work Versus Welfare Trade-Off: 2013,” measured the value of all welfare benefits by state in 2012. In general, the higher the benefit package, the higher the Gini coefficient. States with high income-tax rates aren’t any more equal than states with no income tax. The Gini coefficient measures pretax, not after-tax income, and it does not count most sources of noncash welfare benefits. Still, there is little evidence over time that progressive policies reduce income inequality.

To be clear, our findings do not show that state redistributionist policies cause more income inequality. But they do suggest that raising tax rates or the minimum wage fail to achieve greater equality and may make income gaps wider.

Here is why we believe these income redistribution policies fail. The two of us have spent more than 25 years examining why some states grow much faster than others. The conclusion is nearly inescapable that liberal policy prescriptions—especially high income-tax rates and the lack of a right-to-work law—make states less prosperous because they chase away workers, businesses and capital.

Northeastern states and now California are being economically bled to death by their pro-growth rivals, especially in the South. Toyota didn’t leave California for Texas for the weather. The latest IRS report on interstate migration provides further confirmation: The states that lost the most taxpayers (as a percent of their population) were Illinois, New York, Rhode Island and New Jersey.

When politicians get fixated on closing income gaps rather than creating an overall climate conducive to prosperity, middle- and lower-income groups suffer most and income inequality rises. The past five years are a case in point. Though a raft of President Obama’s policies—such as expanding the earned-income tax credit and food stamps, and extending unemployment benefits—have been designed to more fairly distribute wealth, inequality has unambiguously risen on his watch. Those at the top have seen gains, especially from the booming stock market, while middle-class real incomes have fallen by about $1,800 since the recovery started in June 2009.

This is a reversal from the 1980s and ’90s when almost all income groups enjoyed gains. The Gini coefficient for the United States has risen in each of the last three years and was higher in 2012 (.476) than when George W. Bush left office (.469 in 2008), though Mr. Bush was denounced for economic policies, especially on taxes, that allegedly favored “the rich.”

Our view is that John F. Kennedy had it right that a rising tide lifts all boats. It would be better for low- and middle-income Americans if growth and not equality became the driving policy goal in the states and in Washington, D.C.