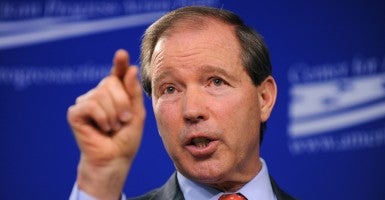 Democrats pushing for a constitutional amendment that would give government the authority to regulate political spending by outside groups will do so without one traditional ally at their side.

In a letter submitted Tuesday to the Senate Judiciary Committee, the American Civil Liberties Union expressed opposition to the amendment, saying it would “lead directly to government censorship of political speech and result in a host of unintended consequences that would undermine the goals the amendment has been introduced to advance.”

Senate Majority Leader Harry Reid, D-Nev., and Minority Leader Mitch McConnell, R-Ky., made a rare joint appearance Tuesday before the Judiciary Committee to discuss the amendment. The measure, sponsored by Sen. Tom Udall, D-N.M., is likely to fail, but Senate Democrats have promised to vote on it this summer.

Democrats have said the legislation is in response to two Supreme Court rulings on campaign finance rules: The 2010 Citizens United decision allowed corporations and unions to spend unlimited amounts on campaigns, as long as they act independently of candidates; and the McCutcheon v. Federal Election Commission decision this year eliminated limits on total amounts individuals can contribute to candidates, committees and political parties.

The ACLU argued the amendment, intended to reign in the spending allowed by those rulings, would “fundamentally break the constitution and endanger civil rights and civil liberties for generations.”