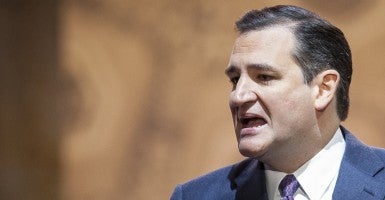 In November, American will have a chance to elect a new Congress. But if some lawmakers have their way, we’d better be quiet about our intentions.

The Senate Judiciary Committee today held a hearing to discuss a constitutional amendment aimed at allowing lawmakers to limit spending on political campaigns by giving Congress the power to regulate “the raising and spending of money and in-kind equivalents with respect to federal elections.” The amendment, which was proposed by Sen. Tom Udall, D-N.M., has been endorsed by 41 Democratic senators.

Give supporters of this amendment their due: At least they take the Constitution seriously enough to realize they’ll have to amend it to limit political speech.

Practically speaking, the amendment isn’t going anywhere in this Congress: It would need two-thirds support of both chambers before it could be sent to the states, and it’s nowhere near that level. That said, let’s consider what’s at stake.

>>>See also: The Heritage Guide to the Constitution

“This amendment, if adopted, would give Congress absolute authority to regulate the political speech of every single American,” Sen. Ted Cruz warned on Tuesday. “This amendment is about power, and it is about politicians silencing the citizens.”

Money, Cruz points out, equates to speech; you can’t run an ad, publish a book or launch a blog without spending money. If lawmakers get to decide how much may be spent and when it may be spent, they’ll effectively be able to shut off political speech—except for the press, which would be given an exemption from government censorship.

It’s not a surprise some in Congress are attracted to the idea of limiting political speech: Americans resoundingly disapprove of the job our lawmakers are doing. Recent polls put Congress’ approval rating around 13 percent, “well below the historical average of 33 percent” as polling firm Gallup noted.

Cruz has introduced a pair of bills that would “eliminate the caps on direct contributions to candidates from individuals” and ensure individuals enjoy the exact same free-speech rights as media corporations.

Throughout American history, the First Amendment has provided a powerful protection to every American. It wasn’t long ago that leading liberals celebrated that fact. “In the entire history of the Constitution, we have never amended the Bill of Rights, and now is no time to start,” the late Sen. Ted Kennedy warned in 1997. “It would be wrong to carve an exception in the First Amendment. Campaign finance reform is a serious problem, but it does not require that we twist the meaning of the Constitution.”

When the East German government was attempting to silence political dissent, writer Bertolt Brecht quipped, “Would it not be simpler, if the government simply dissolved the people and elected another?” That highlights the point that democracy is often messy, usually noisy and occasionally unnerving. That’s fine. Our Founding Fathers wanted to encourage political speech. We can honor them by supporting and affirming the First Amendment.