How Smarter Policies Can Transform the States, Renew the Nation 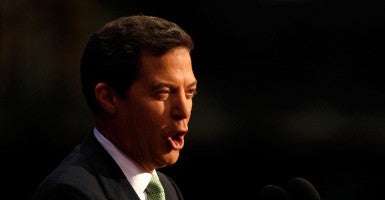 His state doesn’t have pass-through taxes, so owners of small businesses don’t pay taxes on profits as part of their individual tax returns.

Gov. Sam Brownback’s state, Kansas, also added 53,000 jobs from January 2011, when he assumed office, up to last month, according to the Kansas Department of Labor.

“There is no state more transformed than Kansas,” Brownback said in a speech today at The Heritage Foundation. “You change America by changing states. Washington is too big to change. We desperately need this.”

Brownback, a Republican who previously served in the U.S. Senate and House of Representatives, offered a blueprint for how state prosperity can lead to a healthier nation.

The governor’s opening remarks illustrated the premise of the discussion that followed at the Heritage event subtitled “How Taxes, Energy and Worker Freedom Change Everything.”

Stephen Moore, Heritage’s chief economist, hosted the discussion with his three co-authors of the book “An Inquiry into the Nature and Causes of the Wealth of States,” which also provided the event’s main title.

In the book, Moore and fellow economists Arthur B. Laffer, Rex A. Sinquefield, and Travis H. Brown use data to argue that low-tax states across the country outperform their neighbors and help create prosperity for all.

Brownback, and Kansas, provide evidence for that premise. “This is a great success story about how using pro-growth tax cuts can revive a state,” Moore said.

Kansas suffered a deficit in 2010, the year before Brownback became governor.

Half the counties had lost 10 percent or more of population in the previous decade.

If he didn’t change policies, Brownback’s team projected, Kansas would see a $500 million deficit in 2011 – and the rural heart of the state, where he grew up, could be lost.

I’ve told people many times, you don’t hire a new coach or CEO to manage a slow decline. You hire them to change the direction of things.  I am from Parker, Kansas. I want to see these places survive.

As part of a survival plan, Brownback last year collapsed three income tax brackets into two and reduced the top rate to 4.8 percent from 6.45 percent.

The governor says he has increased the state contribution to K-12 education each year and hired a task force that spearheaded more funding for technical education and efforts to raise low-level reading skills.

What we are trying to do is get people skills, so they can get jobs that are not minimum wage. I am proposing to the country how to renew the nation. You will see interesting models from states about how to make the nation American again.

For their book, Moore and his co-writers studied states that they say don’t provide a good model for a prosperous country: those that have adopted progressive individual income taxes in the past 53 years.

Looking at data for the three years before each of those 11 states acted — they include West Virginia, Connecticut, Maine, Michigan, and Illinois — the authors concluded that each state suffered in the years that followed, as told by several metrics.

Laffer, a member of President Reagan’s Economic Policy Advisory Board, said each of the 11 states incurred declining value in population, tax revenue, and output in the years after imposing a progressive income tax.

Moore said that from 1990 to 2010, Texas and Florida — two large states that don’t levy an individual income tax — added three jobs for every one that California and New York added.

And although sunny weather certainly attracts residents to Texas and Florida, Moore said, a more measurable variable plays a role too:

California will always have a natural advantage over a state like Minnesota. You can’t control the weather.  What policy makers can control is another factor; northern states have to make tax systems more competitive.