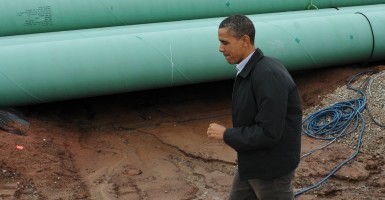 Congress and the federal government have enacted policies and made decisions in the name of protecting the environment. The problem is, now those decisions have backfired — and made us worse off environmentally. Here are five examples:

1. Keystone Delay Means More Rail: Stating concern for the environment, President Obama delayed and rejected the initial Keystone XL Pipeline permit even though the State Department found no environmental complications. After five years of political dodges and delays from the president, TransCanada is now seriously considering using railroads to deliver the oil to refineries – an option the State Department did find less environmentally safe. Carloads of crude oil have increased from 9,500 in 2008 to more than 407,000 last year. The State Department determined that rail delivery had a higher likelihood of spills and  higher CO2 emissions than pipelines. Rail transport should be an option, of course. But if Obama’s top concern is the environment, he should opt for the pipeline – and not drive TransCanada to rail transportation.

2. Biofuels are an ecological and human disaster: As part of his climate change agenda, Obama has praised alternative fuels as the way of the future and condemned oil-based transportation fuels for tying the U.S. to dependence on CO2 emissions and foreign countries. But evidence continues to mount that ethanol, the largest source of alternative fuels, is at best accomplishing nothing in the way of efficiency or energy independence. Not only are biofuels an economic loser, the Department of Energy funded a recent report that found biofuels actually increase CO2 emissions. Other studies have shown our biofuels policy results in poorer land and water quality, not to mention higher food prices. Though America’s biofuels policies predate Obama, there’s no reason to support a policy that even environmental organizations have called “an ecological disaster.”

3. Wind Power and Bloody Bird Baths: There is no end to what the Obama administration will do to protect critters such as lesser prairie chicken, but it has a funny way of protecting the environment when it comes to politically correct renewable energy projects such as wind. For example, the Obama administration has worked to cut red tape for wind projects by allowing them a higher kill rate of bald and golden eagles during a project’s first 30 years of operation, which is conveniently the approximate lifetime of a wind generator. Who needs America’s bird when you can have an intermittent power source propped up with the taxpayer’s money?

4. Killing Nuclear Energy: Obama and his administration have expressed support for nuclear power, which fits neatly into their carbon-less vision for America’s electricity supply. Nuclear power is emissions-free. It also has a small physical footprint and waste stream compared to the massive amount of energy it generates. But one look at the state of the industry would tell you otherwise.

Because of the Department of Energy’s complete failure to meet its responsibilities to collect and dispose of nuclear waste, the Nuclear Regulatory Commission has stopped all licensing activities. Through no fault of the industry or technology, this means no new plants or life extensions for existing ones. This has been a failure of many administrations and congresses, but Obama has distinguished himself by abandoning the waste plan Congress passed and replacing it with no plan at all. If that weren’t enough, an antiquated and onerous regulatory regime has only become more antiquated and onerous on Obama’s watch.  Between his policies on nuclear waste and regulation, Obama is effectively killing an affordable, CO2-free energy source.

5. Global Warming Poverty Obama has set into motion regulations that severely limit CO2 emissions from electricity generation (as well as vehicles). If successful, these regulations will effectively phase out some 40 percent of the nation’s electricity, which is generated by coal. A Heritage Foundation study found that doing this will cause energy prices to rise (along with everything else that depends on energy) and jobs to be lost, particularly in manufacturing. One doesn’t have to look far or hard to see that some of the poorest countries in the world are those that struggle to provide affordable and reliable electricity, which is a basic building block of economic growth and human wellbeing. And energy poverty leads to environmental poverty, whether in Germany or in Africa. If these regulations hurt America’s economy, the long-term effect on America’s environment may well be negative – no matter how well-intentioned the original regulations were.