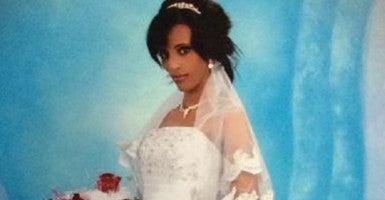 As U.S. officials and bureaucrats depict the wife of an American citizen’s plight in Sudan as outrageous, delicate and complicated, conservative commentator Mark Steyn proposes a bold stroke for President Obama:  Use that pen and phone he talks about using in this “year of action” to free her.

“The president could pick up the phone, [call] the Bureau of Citizenship and Immigration Services and order them to confer U.S .citizenship on Daniel Wani’s wife,” Steyn writes.

Ishag, who married Wani in 2011 and is in line for a visa to go to America, faces execution for refusing to give up her Christian faith.

Steyn, who says his New Hampshire home is a two hours’ drive from Wani’s residence in Manchester,  says this move would be decisive and make much more sense than the president’s proposed amnesty for illegal immigrants:

Right now, the entire political class is obsessed with finding a way to reward tens of millions of undocumented Americans who broke into America and decided to stay. Mr. and Mrs. Wani followed the [immigration] rules — the lethargic, capricious, incomprehensible, non-functioning rules. And because they agreed to submit to the system, an American citizen’s wife will die in Khartoum waiting for the visa that never came. …

The United States bureaucracy failed Daniel Wani, grievously. Washington should make Meriam Ibrahim [Ishag] a U.S. citizen. The ambassador in Khartoum should then demand access to the family. And the U.S. government should make plain to its Sudanese counterparts that it expects the entire family on a plane out of there in 48 hours.

Wani fled to America from Sudan in 1998 and became an American citizen in 2005, according to media reports.

Imprisoned since February, Ishag was convicted of adultery for marrying Wani, also a Christian, and apostasy for refusing to renounce her Christian faith. She awaits execution under Islamic law for the second conviction.