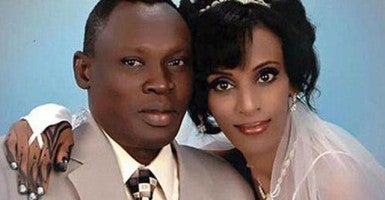 The mother sentenced to death in Sudan for her Christian faith gave birth to a baby girl in prison today, the Daily Mail reported in an exclusive. Meriam Yahia Ibrahim Ishag, who has spent four months shackled to the floor of a cell, delivered the baby five days early in the hospital wing at Omdurman Federal Women’s Prison in North Khartoum, the Mail reported.

“This is some good news in what has been a terrible ordeal for Meriam,” lawyer Mohaned Mustafa Elnour told the newspaper. “I think they are going to call the baby Maya.”

More members of Congress had been urging the Obama administration to act to rescue Ishag, the wife of an American citizen who was condemned to death in Sudan for refusing to renounce her Christian faith. Her husband, Daniel Wani, says he “doesn’t know” if the State Department is trying to free her.

The couple had been waiting in line for Ishag to win U.S. citizenship through her marriage to Wani, also born in Sudan but now a New Hampshire resident who became a naturalized citizen in 2005.

“She’s not good,” Wani said in an interview Friday conducted via Skype from Sudan by Fox News Channel’s Greta Van Susteren. “Prison is not a good place.”

Ishag, a physician, is 27 and was about nine months pregnant with the couple’s second child, wire services report. Visitors to her cell, where the couple’s 20-month-old son, Martin, also is held,  told reporters she was shackled.

“She is not going to convert … to Islam,” Wani said, when Van Susteren asked about his wife’s state of mind when he visited Tuesday. “Let them do whatever they’re going to do. She’s still a Christian.”

Earlier this month, a judge in the capital of Khartoum sentenced  Ishag to 100 lashes for conviction under Islamic law of adultery (marrying a Christian) and death by hanging for apostasy (refusing to renounce her Christian faith) two years after she gives birth.

Wani, who uses a wheelchair, twice took his wife’s case to U.S. Embassy officials last fall, he told Van Susteren. He said he spoke with a woman there who said “they don’t have time” — and he concluded “they don’t want to listen.”

Van Susteren asked Wani whether the State Department is helping the family now. “I don’t know,” he replied.

The couple will appeal the case to a higher court in Sudan that is seen as unlikely to show mercy.

Related:  These Human Rights Abuses Should Enrage Us All

A child when her Muslim father left her Christian mother, Ishag told the court that she did not consider herself to be a Muslim.

Sen. Marco Rubio, R-Fla., and three other senators introduced a bipartisan resolution aimed at increasing international attention on the case.

“I am disgusted and appalled by the inhumane verdict Ms. Ibrahim [Ishag] has received, simply for refusing to recant her Christian faith,” said Rubio, a member of the Senate Foreign Relations Committee who offered the resolution with Jim Inhofe, R-Okla., Chris Coons, D-Del., and Bob Menendez, D-N.J.

Wani and his brother Gabriel fled the violence in Sudan in 1998. He married Ishag in 2011.

The State Department since 1999 has called Sudan one of the world’s worst violators of religious rights, designating it as a “country of particular concern.” Seven other nations on State’s “CPC” list since 2011 are Burma, China, Eritrea, Iran, North Korea, Saudi Arabia and Uzbekistan.

The U.S. Commission on International Religious Freedom joined dozens of organizations in condemning Sudan’s treatment of Ishag. In previously scheduled testimony Thursday before a House subcommittee on the state of religious freedom around the world, commission Chairman Robert P. George said:

The government of Sudan led by President Omar Hassan al-Bashir continues to engage in systematic, ongoing, and egregious violations of freedom of religion or belief. It imposes a restrictive interpretation of Shari’ah (Islamic law) on Muslims and non-Muslims alike, using amputations and floggings for crimes and acts of ‘indecency’ and ‘immorality’ and arresting Christians for proselytizing.

President al-Bashir and other National Congress Party leaders have stated that Sudan’s new constitution, when drafted, will be based on its interpretation of Shari’ah. Governmental and non-governmental attacks on the Christian community also continue. These religious freedom violations, as well as the violence in Southern Kordofan, Blue Nile, and Darfur, are the result of President Bashir’s policies of Islamization and Arabization.