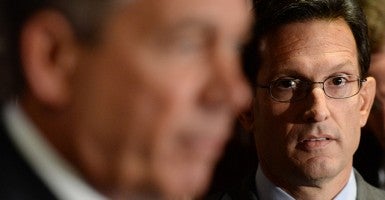 When the annual defense authorization bill comes to the House floor this week, a controversial amnesty amendment won’t be up for debate.

House Majority Leader Eric Cantor, R-Va., ruled out consideration of the ENLIST Act, a measure that would grant citizenship to illegal immigrants if they join the military. Rep. Jeff Denham, R-Calif., author of the amnesty measure, had planned to offer it as an amendment to the must-pass defense bill known as the National Defense Authorization Act.

“No proposed ENLIST amendments to NDAA will be made in order,” Doug Heye, Cantor’s deputy chief of staff, told Politico on Friday.

Cantor’s announcement came just hours after Heritage Action for America, the think tank’s lobbying arm, released a video of Denham asserting that the ENLIST Act was “the fastest pathway to citizenship.”

Earlier in the week, Heritage’s James Jay Carafano, vice president for defense and foreign policy studies and E.W. Richardson Fellow, said the ENLIST Act “makes a mockery of U.S. immigration law” and was unfair to immigrants who “play by the rules.”

“The right thing for Congress to do is to focus on the real tough issues of how to preserve vital military capabilities and readiness that could well fall by the wayside,” Carafano told The Foundry in response to Cantor’s announcement. He added:

The president handed the Congress a disingenuous defense budget proposal and a Quadrennial Defense Review that most experts agree was just a rubber stamp for cutting military power. A good NDAA is essential for giving the Pentagon a roadmap for the tough tasks it faces in making missions and resources match. Distractions like the ENLIST Act divert focus from serious legislating.

Prior to Cantor’s decision, some high-ranking Republicans were lining up to fight Denham’s plan.

Speaking at The Heritage Foundation on May 6, House Armed Services Chairman Buck McKeon, R-Calif., warned that the Denham plan could endanger the defense bill.

“Do I think we should put on the defense bill an amnesty provision for those [illegal immigrants] who serve in the military? The answer is no,” McKeon said.