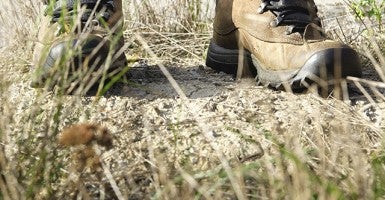 An amnesty provision for illegal immigrants, if attached to a defense bill, would politicize national security and “make a mockery of U.S. immigration law,” The Heritage Foundation’s top foreign and defense policy expert said today.

A bill sponsored by Rep. Jeff Denham (R-Calif.) would grant citizenship to young men and women who are not here legally if they join the military. Denham and other advocates of action on immigration reform have pushed for weeks to make the California Republican’s “ENLIST Act” an amendment to the defense bill.

“The ENLIST Act is unnecessary for national security; makes a mockery of U.S. immigration law; and is a slap in the face to those who want to come here and play by the rules,” said James Jay Carafano, Heritage’s vice president for defense and foreign policy studies and E.W. Richardson Fellow.

Carafano said inserting an amnesty provision into the legislation — called the National Defense Authorization Act (NDAA) — “goes beyond the pale in playing politics with national security.” The move “destroys the credibility of the NDAA as must-pass legislation that the nation needs to provide for the common defense,” he said.

Advancing an amnesty-first agenda on the backs of our brave men and women in the military is deplorable. The ENLIST Act creates radical and perverse incentives that will have a negative impact on our military and our immigration system. It has no place in a debate over the future of our military, which is currently reducing personnel.

Thirty-five minutes into an appearance at Heritage earlier this month, another California Republican — Rep. Buck McKeon, chairman of the Armed Services Committee — repeated previous assertions that the Denham plan could endanger the legislation and shouldn’t go anywhere.

McKeon, in response to a question, said: “Do I think we should put on the defense bill an amnesty provision for those [illegal immigrants] who serve in the military? The answer is no.”

Needham said it’s up to the House Rules Committee to stop what he considers a misguided effort.