Chamber President: If You’re Not Doing Amnesty, Then Don’t Bother 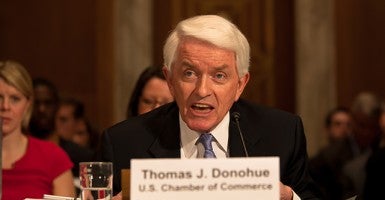 A majority of Republicans (60 percent) and a plurality of Independents (41 percent) say they would be less likely to vote for a candidate who endorsed amnesty. But the president of the Chamber of Commerce says the GOP must pass an immigration plan that includes amnesty if they hope to have any chance in 2016.

“If the Republicans don’t do it, they shouldn’t bother to run a candidate in 2016,” Chamber President Tom Donohue joked in Washington earlier this week. “Think about that. Think about who the voters are. I just did that to get everybody’s attention.”

Maybe Donohue should do a little thinking of his own about who the voters are – and more importantly, about what immigration reforms are right for the country, not just special interests. Donohue didn’t mention the word “amnesty,” but the legislation the Chamber has backed to date includes it.

Immigration reform is no joking matter, and comments like these are not only not funny, they are not helpful.

If the Chamber is serious about immigration reform, it should get behind the kind of measures that will fix our broken system – not support the same old ones that have made the problem worse.

Conservatives are in favor of immigration reform. We are not in favor of amnesty. We want to secure the border, fix our guest worker programs, and increase economic opportunity and mobility for our citizens and those who desire to be citizens. But there is absolutely no reason an immigration plan that does those things has to grant amnesty to the millions of people who have come here illegally. No reason except that those who claim to want “comprehensive” reform actually want amnesty more than anything else.

It’s clear from the Obama administration’s handling of the border that the president has no interest in securing it. It is clear from remarks made by Sen. Chuck Schumer (D-N.Y.) and other liberals that despite all their talk about “comprehensive” reform, those pushing it are interested in one thing and one thing only: amnesty. They want it first, and every other reform can come later, if ever.

President Obama, liberals in Congress, labor unions and other special interest groups (including, apparently, the Chamber) are the truly “single-issue” constituency when it comes to immigration reform. They want amnesty and, if they can’t get it, then to heck with every other reform people can agree on.