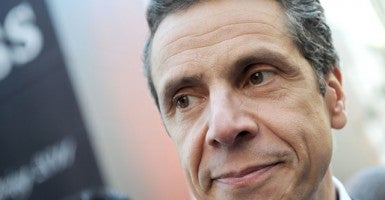 When Remington Arms announced in February it was opening a gun manufacturing factory in Alabama, workers at the company’s oldest and largest plant in Ilion, N.Y., were told no jobs would leave New York.

Now, three months later, up to 150 jobs at the New York plant are in jeopardy as Remington has announced it will shift production of the Bushmaster rifle and 1911 pistol assembly lines to Alabama.

Remington’s Bushmaster is among the guns targeted by New York’s SAFE Act, a gun-control law signed in January 2013 by Gov. Andrew Cuomo, a Democrat, following the school shooting in Newtown, Conn.

In February, Cuomo spokesman Rich Azzopardi attacked critics who warned about the law’s ramifications for Remington’s 1,200 employees in New York.

Some are misinformed, others gleefully spreading misinformation, but to be clear, no Remington jobs are leaving NY.

But the head of Ilion plant’s union knew better even then. “It can’t be good,” Fran Madore, president of United Mine Workers Local 717, told The Post-Standard of Syracuse. “How can it be good?”

Cuomo faced the brunt of criticism in the wake of Friday’s announcement.

New York Assemblyman Marc Butler, a Republican, pressed the governor to respond. He told the Utica Observer-Dispatch it was no coincidence Remington picked the Bushmaster line to move out of New York.

“Remember that only a short time ago, when it was announced that Remington was constructing a new facility in Huntsville, Ala., this administration assured us that Ilion would not be affected,” Butler said.

Like Cuomo, New York State Sen. James Seward, a Republican, had promised in February no jobs would leave the state. In the wake of the news Friday, he said: “A concerted effort is needed in Albany to show Remington unified support, and that includes a revision of the state’s excessive anti-gun laws. Otherwise, I am afraid additional jobs, and families, will be forced to move south.”

Remington strongly protested New York’s SAFE Act. The law allows Remington to manufacture “assault weapons” that contain more than 10 rounds of ammunition, but it can’t sell them in the state.

“We’re all disappointed by the SAFE Act,” Kollitides said. “Frankly, we think it’s unconstitutional, but that was not a driving decision maker for us.”

In that same interview, Kollitides also said, “We’re not taking jobs out of New York.”

A spokesman for Remington told the Observer-Dispatch on Friday, “This was a strategic business decision to concentrate our resources into fewer locations and improve manufacturing efficiency and quality.”