Why Is the Budget Deficit Falling? You Can Thank the Tea Party 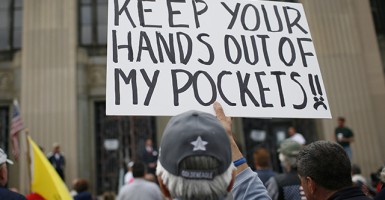 The Congressional Budget Office reported that the budget deficit is falling rapidly from its trillion-dollar-plus Rocky Mountain highs during President Obama’s first term.

I estimate that the deficit will likely be $400 billion or lower this fiscal year, and that is a near $1 trillion improvement over four years. As a share of the economy, federal deficits have tumbled from nearly 10 percent to just under 3 percent.

The question is, Why the progress?

The main factor has been falling government spending, which is a positive force for the economy. And the reason government spending is falling is that the budget caps and the automatic cuts called “sequester,” which were part of the under-appreciated 2011 budget deal between Republicans in Congress and Obama, are working to force down outlays on non-entitlement programs.

According to the Congressional Budget Office, annual outlays peaked at $3.598 trillion in fiscal 2011. At the beginning of 2011, the CBO projected that the total outlays would be just shy of $4 trillion by 2014.

But the tea party movement revolted in the 2010 midterm elections and helped sweep into the House scores of fiscally conservative Republicans, and the GOP seized the majority. This pivotal election radically changed the direction of our fiscal deterioration.

The bad news is that expenditures are expected to jump a whopping 7 percent and will be closer to nearly $3.87 trillion, thanks to a bad budget deal last year that suspended the spending caps for a year and raised the ceilings to accommodate a bipartisan resumption of spending. But even with this setback, the path of spending has improved remarkably from Obama’s reckless first term.

The sequester saved about $80 billion in 2013. Those across-the-board cuts in defense programs were tough, but the domestic cuts were easily absorbed, notwithstanding the moans from government officials and attempts by the White House to scare the public. (Remember the shutdown of the air-traffic-control towers and the threats to food-safety inspections?)

Yes, the red ink is still flowing way too fast, and the more than $6 trillion added to the debt in Obama’s first five years in office shatters all records for fiscal deviancy. Obama will clearly go down in history as the most financially irresponsible president in history, and it’s ironic that Democrats used to say that of George W. Bush, who borrowed at half of the Obama pace.

The budget numbers are sugarcoated a bit by the accounting gimmick of the payback bailout money doled out to housing giants Fannie Mae and Freddie Mac and banks’ being counted as “negative outlays.” Still, discretionary spending is way down, thanks to caps. From a peak of 9.4 percent of GDP in fiscal 2010, these outlays collapsed to 7.6 percent last year and may slide to under 7 percent in Obama’s final year in office. The caps and sequester have squeezed green-energy programs, the Legal Services Corporation, federal land-acquisition programs, and the EPA. Liberals have come to hate sequester because it pinches the programs they care so much about.

The worry is Republicans may flinch and suspend the hard-fought caps yet again next year so they can continue spending.

Already some Republican appropriators are joining with Democrats to call for suspending the budget reforms that ended earmarks for bridge to nowhere–type projects. And Obama would love another $100 billion spending spree on infrastructure and other public-works projects to fund his union pals.

On the revenue side, receipts are up because growth has been slow but steady and the stock market is on a tear. Revenues are up more than 8 percent this year, but the pace of tax collections could and should be double that if we achieve 4 percent growth. With 4 percent growth, enforcement of spending caps, and even minimal entitlement reforms, the budget could be balanced by 2017.

The wild card in this forecast is Obamacare and other entitlements, which have been rising faster than 5 percent this year. With some 5 million more Americans on Medicaid now because of Obamacare, the cost acceleration is no surprise. Amazingly, the White House calls this spending a sign that the new health law is working.

Obama not only gave us the most expensive new entitlement in 40 years, but he has fought nearly every spending reform of the last three years. Now he wants to take credit for being a deficit cutter. Anyone who believes that has been smoking some of that legalized pot in Colorado.