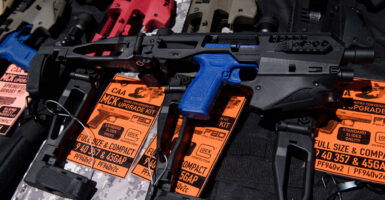 A MCK pistol brace is displayed with firearm accessories for sale at the Crossroads of the West Gun Show in Costa Mesa, California, June 5, 2021. (Photo: Patrick T. Fallon/AFP/Getty Images)

John R. Lott Jr. is the president of the Crime Prevention Research Center. Until January, he was the senior adviser for research and statistics at the U.S. Department of Justice’s Office of Legal Policy, and he worked on voter fraud issues.

The Biden administration’s newly released regulations regarding “pistol-stabilizing braces” will instantly turn tens of thousands of law-abiding Americans into felons and create a national rifle registry. But the Biden administration and the media exaggerate the costs and ignore the benefits these braces produce.

Few seem to realize that stabilizing braces for pistols were originally designed to allow wounded and disabled veterans who may have lost the use of part of their hand to hold handguns. They are essentially a strap attached to the gun. Disabled individuals are often viewed as easy targets by criminals, and stabilizers make it easier to defend themselves. The Bureau of Alcohol, Tobacco, Firearms and Explosives originally approved pistol braces during the Obama administration.

There are plenty of statements from disabled veterans, such as Rick Cicero, who lost his right arm in an explosion in Afghanistan and can still use a gun today because of the pistol-stabilizing brace. But outside of a brief mention in a Fox News story, news articles on the new regulations never mention that these braces help the disabled and make it possible for them to defend themselves.

Former President Barack Obama was hardly a friend of gun ownership, but now the Biden administration has changed the Obama administration’s decision. The ATF now concludes that any foreign-made pistols with stabilizing braces violate the law and are retroactively considered rifles and violate the size requirement for rifles. As such, registration or removal of the brace won’t bring it into compliance. The ATF leaves only two options: the destruction of the guns or their surrender to ATF. This includes imported pistols that never had a brace added to them.

Of course, how the ATF is supposed to know whether you used to have the pistol brace attached to the gun is a mystery. Nor is it obvious why functionally identical foreign-made pistols should be treated differently than domestically manufactured ones.

All this started after President Joe Biden cited a crime in 2021 in Colorado—where a shooter used a pistol stabilizing brace when attacking shoppers in a grocery store—to justify calling for classifying such brace-affixed pistols as machine guns.

Ahmed Al Alwi murdered 10 people at close range in a Boulder, Colorado, grocery store. A previous shooting in 2019 by Connor Betts, in Dayton, Ohio, also involved a pistol brace. These are the only two cases of their kind and, more importantly, neither of them had any difficulty holding their guns and all their shots were fired at a short distance. There is no evidence that the brace made any difference in their ability to carry out the attacks. And there has been no surge in crime by the disabled or others using these braces.

These new regulations aren’t surprising after Steven Dettelbach, a controversial gun control advocate, was confirmed as director of the ATF. He was narrowly confirmed only with the unanimous support of all voting Democrats, including the support of Democrats who claim to support the Second Amendment, such as Sens. Jon Tester of Montana and Joe Manchin of West Virginia.

With no evidence that these two attacks were any more lethal with stabilizing braces—and with no attempt to make that case—gun control advocates haven’t seriously tried to justify the new regulation. The cost will be to the disabled Americans who will now have a harder time being able to defend themselves and their families.