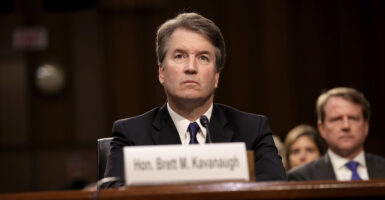 The governors of both Maryland and Virginia begged the Department of Justice in May to enforce a federal law protecting Supreme Court justices from the far-left activists protesting over abortion.

The DOJ did not fully respond to the request until June 8—the same day that authorities arrested Nicholas Roske and charged him with attempting to kill Justice Brett Kavanaugh—but refused to discuss whether the protesters had broken the law citing “longstanding policy.”

“We thought there would be more urgency,” Michael Ricci, who served as former Republican Maryland Gov. Larry Hogan’s spokesman, shared with The Daily Signal in a Wednesday phone interview. “In this climate, there are any number of threats, both specific and vague, against public officials. And we thought there would be more urgency about protecting the perimeter of the justices’ homes, and by extension, their neighborhoods.”

Ricci described the Hogan team as both “disappointed” and “surprised” that the Justice Department lacked urgency in this matter.

“Justice Kavanaugh lives on a residential block. It’s not like his house is a gated community,” he noted, adding that families in the neighborhood had expressed security concerns about the protests, which took place around children’s bedtimes. “And the assassination attempt on Justice Kavanaugh was just an example of why we thought there should have been more urgency.”

Federal law, 18 U.S. Code 1507, forbids picketing or parading “in or near a building or residence occupied or used by such judge, juror, witness, or court officer” with the intent of intimidating or influencing that person.

Laws in both Maryland and Virginia also prohibit picketing to disrupt or threaten to disrupt that individual’s “tranquility in his home.” The Maryland Attorney General’s Office has reportedly disputed the constitutionality of the state’s law.

And in Virginia, Fairfax County Board of Supervisors Chairman Jeffrey McKay denied Virginia Gov. Glenn Youngkin’s request to establish an expanded security perimeter around the homes of three Supreme Court justices who live in Fairfax County.

“To the extent that federal law enforcement was involved, they were more focused on getting the justices to and from their homes, and weren’t as focused on the immediate community,” he explained. “So it was clear to us we were not going to get a lot of backup, in terms of protecting the area and keeping the peace on the streets, so to speak. So that really became a state, county operation.”

And Hogan’s office never really received any guidance from the DOJ on the matter, added Ricci, noting that when Maryland had issues with vaccine distribution and they reached out to the White House, someone would reach back out or put in a call to the governor to speak to him directly.

“Nobody at the DOJ ever asked to or ever reached out to speak to the governor directly about his concerns about the justices,” he said. “And that, to me, is what stands out from the experience.”

Hogan himself has not spoken to the justices, Ricci said, explaining that the former governor did not want to “inject himself in that.”

A Youngkin aide told The Daily Signal that Youngkin has spoken to the justices who live in his state on multiple occasions because he was concerned not only for their own welfare but also for the impact that the protests could have on the justices’ families—particularly that of Justice Amy Coney Barrett, who has seven young children.

On July 2, the Supreme Court’s chief security officer, Gail Curley, asked top Maryland and Virginia officials to enforce their laws protecting the justices. Since then, law enforcement have continued to stand outside the justices’ homes as the protests take place.

According to Ricci, media were aware of the Supreme Court security officer’s request before Hogan himself was—”I was first asked about it by The Washington Post on Friday night that weekend. And it didn’t get to our office in an email until 10:30 the next morning.”

Ricci said he emailed Curley asking how the press got ahold of the letter before Hogan did, but Curley never answered. The Supreme Court press office did not respond to multiple requests for comment on this point.

“That in and of itself was troubling to me,” Ricci said. “The court had already had leak issues.”

The protests are ongoing—on Sunday evening, activists again marched up and down Kavanaugh’s street in the icy rain as U.S. marshals guarded the house.

Youngkin’s office continues to monitor the situation and has directed Virginia State Police to be at the ready and in “constant coordination” with local authorities, spokesman Christian Martinez told The Daily Signal on Tuesday.

“Governor Youngkin will continue to push for every resource of federal law enforcement, including the U.S. Marshals, to be involved while the Justices continue to be denied the right to live peacefully in their homes,” he said.

Until now, Maryland has been able to use county statues and laws on disorderly conduct and noise ordinances to keep the peace. Now Wes Moore, a Democrat, is the state’s governor. A spokesman for Moore did not respond to multiple Wednesday requests for comment for this story.