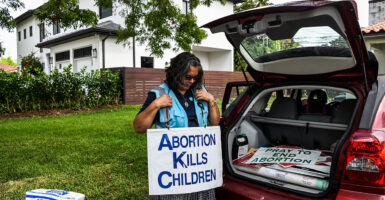 Florida pro-life activist Madelyn Ocasio takes anti-abortion banners and posters from her car at her home in Miami on May 3, 2022. (Photo: Chandan Khanna/ Getty Images)

“As [Florida Gov. Ron DeSantis] said, we are better when everybody counts,” the governor’s press secretary, Bryan Griffin, said in a statement Tuesday, adding:

The Florida Supreme Court denied both of Planned Parenthood’s emergency motions asking the court to block Florida’s law from taking effect. The court also accepted jurisdiction of the case and set a briefing schedule. From here, we will continue to defend our pro-life protections.

House Bill 5, which took effect on July 1, bans abortion after 15 weeks of gestation. It allows exceptions when the mother’s life is at risk or in danger of “irreversible physical impairment,” or if the baby has a fetal abnormality, but does not offer exceptions for rape or incest.

“House Bill 5 protects babies in the womb who have beating hearts, who can move, who can taste, who can see, and who can feel pain,” DeSantis said when he signed the bill in April. “Life is a sacred gift worthy of our protection, and I am proud to sign this great piece of legislation, which represents the most significant protections for life in the state’s modern history.”

Planned Parenthood filed its lawsuit against the state of Florida in June, and the state trial court issued an order blocking the ban a month later. However, the state appealed the ruling, keeping protections for the unborn after 15 weeks in place.

On Monday, the Florida Supreme Court agreed to hear Planned Parenthood’s arguments. The court will schedule oral arguments in a separate order.

“As the Supreme Court said in [Dobbs v. Jackson Women’s Health Organization], it’s clearly in the state’s purview to protect the most vulnerable citizens of the state,” Hawkins told The Daily Signal, referring to the court’s ruling last June that overturned Roe v. Wade. “And that includes preborn human beings.”

DeSantis has said he hopes to expand protections for Florida’s unborn children beyond 15 weeks.

“The upcoming 2023 Florida legislative session starts in March, and we look forward to working with the Florida Legislature to further advance protections for innocent life,” Griffin told The Daily Signal on Tuesday afternoon.

Griffin also criticized Vice President Kamala Harris’ Sunday speech in Tallahassee, Florida, commemorating what on Jan. 22 would have been the 50th anniversary of Roe v. Wade. In her speech, Harris quoted the Declaration of Independence, but omitted reference to the right to life.

“The Declaration of Independence enumerates three unalienable rights: ‘life, liberty, and the pursuit of happiness,’” Griffin said, “and we stand for all of them.”