A Sorry Set of Anniversaries That Will Cost Americans 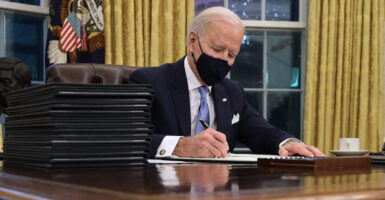 Two executive orders by President Joe Biden have turned agencies such as the Pentagon, Federal Reserve, and the Securities and Exchange Commission into climate agencies that regulate greenhouse gas emissions. Pictured: Biden signs a series of executive orders Jan. 20, 2021, in the Oval Office just hours after his inauguration. (Photo: Chip Somodevilla/Getty Images)

Many if not most Americans were up in arms when news broke that an obscure federal regulatory agency was considering a ban on natural gas stoves.

Rightly so. A government that meddles in Mama’s kitchen for no good reason clearly has gotten too big

But here’s the problem: This kind of regulatory activity is now happening almost every day, whether it makes headline news or not.

Two years ago, on Jan. 20 and 27, President Joe Biden signed two executive orders—EO13990 and EO14008—to deploy an “all of government” regulatory agenda designed to rapidly phase out the production and consumer use of conventional energy. The goal is to halve U.S. greenhouse gas emissions by 2030 (relative to 2005 levels) and ultimately reach “net zero” emissions by 2050.

If that still sounds obscure, think about how your phone alarm woke you up on time, how you made breakfast, got to work or school today, and enjoyed entering a temperature-controlled room. Every step (and dozens more) required energy, and it’s only the start of the day.

With those two orders in the first week of his term, Biden could take his hands off the wheel and let regulatory agencies do the rest of the job via even more obscure rule-makings, guidance, reports, standards, and bureaucratic forms.

Perhaps the most obvious upshot of the two executive orders: the immediate cancellation of the Keystone XL pipeline’s cross-border permit and new lease sales for oil and gas production on federal lands and waters.

But between then and the recently considered, infamous gas stove ban have been dozens of regulations targeting private sector investment, exploration, production, distribution, and consumer use of conventional energy in the long term.

For example, in just the next few weeks, regulatory comment periods will close on new climate regulations by the:

Executive Orders 13990 and 14008 have turned the Pentagon, Federal Reserve, Securities and Exchange Commission, and others into climate agencies that regulate greenhouse gas emissions.

These regulations are designed for the long term—that is, to keep new energy infrastructure and use from being “locked in.” At some point, the effect will catch up with Americans.

The Heritage Foundation attempted to model these effects using a replica of the Energy Department’s energy model and found the Biden administration’s climate commitment would reduce the nation’s gross domestic product by $7.7 trillion by 2040. (The Daily Signal is Heritage’s multimedia news organization.)

That reduction in GDP is about $87,000 in lost income for an average family of four. Importantly, it will do nothing to reduce global temperatures by the end of the century.

As a presidential candidate, Biden made clear he was running to “eliminate fossil fuel.” Americans shouldn’t be surprised this is exactly what they’re getting.

But here’s the deeper problem that should concern all Americans, be they conservative or liberal, climate catastrophist or realist: Nearly every agency has become a climate agency, regardless of its statutory mission established by Congress.

Some agencies are stretching their statutory authority beyond recognition to become climate regulators.

Queue up, for example, the Securities and Exchange Commission’s infamous proposed rule on disclosing greenhouse gas emissions. What do emissions have to do with the SEC’s mission “to protect investors, maintain fair, orderly, and efficient markets, and facilitate capital formation,” anyway?

Other agencies are ignoring the job that Congress tasked them to do. For example, although the Interior Department is required by law to hold quarterly oil and gas lease sales, it took many rounds of court cases and another act of Congress just to get a modicum of compliance from the Biden administration.

“Lawless” is a strong word that should be used judiciously, but this kind of regulatory activity is approaching it. The Supreme Court and Congress will have to decide.

Most Americans wouldn’t have a clue what “EO13990” and “EO14008” refer to, for good reason: They are busy living their lives and being productive.

Without a single act of Congress or even a debate by their elected representatives, Biden’s two executive orders put in motion an all-of-government regulatory agenda that is only just beginning to impact Americans’ everyday lives.