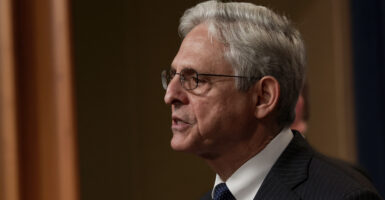 Following attacks on over 78 pro-life groups across the nation, the Department of Justice (DOJ) has finally indicted two pro-abortion activists for attacking pro-life facilities in Florida.

Twenty-seven-year-old Caleb Freestone and 23-year-old Amber Smith-Stewart “targeted pregnancy resource facilities and vandalized those facilities with spray-painted threats,” according to the DOJ. The threatening language that the two used to vandalize the pro-life facilities mirrors that of the terrorist group Jane’s Revenge.

Freestone has previously been arrested on multiple occasions, including for disrupting a school board meeting, and has said he is supportive of the “antifascist political movement.” Social media that appears to be affiliated with Smith-Stewart indicates that she also is affiliated with Antifa.

“According to the indictment, Freestone and Smith-Stewart, and other co-conspirators, are alleged to have spray painted threats, including ‘if abortions aren’t safe than niether [sic] are you,’ ‘YOUR TIME IS UP!!,’ ‘WE’RE COMING for U,’ and ‘We are everywhere,’ on a reproductive health services facility in Winter Haven, Florida,” the DOJ said in a release.

Freestone and Smith-Stewart also attacked facilities in Hollywood, Florida, and Hialeah, Florida, the DOJ said, noting that the attackers violated the Freedom of Access to Clinic Entrances (FACE) Act by “using threats of force to intimidate and interfere” with the pro-life group’s operations providing reproductive health services.

“The indictment further alleges that Freestone and Smith-Stewart violated the FACE Act by intentionally damaging and destroying the facility’s property because the facility provides reproductive health services,” the DOJ release said.

If they are convicted, Freestone and Smith-Stewart face up to 12 years in prison each, three years of supervised release, and could be fined up to $350,000.

At least 78 pro-life groups and 108 churches have been attacked since May, according to Catholic Vote trackers. Vandals have often tagged these buildings with threats such as, “If abortions aren’t safe, neither are you,” making the attacks incidents of suspected pro-abortion violence.

Until Tuesday, the DOJ’s Civil Rights Division had refused to share with The Daily Signal whether it is prosecuting any of these cases under the Freedom of Access to Clinic Entrances (FACE) Act, which “prohibits threats of force, obstruction and property damage intended to interfere with reproductive health care services.”

That same Civil Rights Division charged 26 pro-life individuals in 2022 with violations of the FACE Act—though the legislation protects both pro-life pregnancy centers and abortion clinics, as a DOJ official noted to Rep. Chip Roy, R-Texas, in December.

Also in December, Associate Attorney General Vanita Gupta revealed that DOJ has been targeting pro-life activists through the FACE Act as a response to the overturn of Roe as she delivered remarks at the Justice Department’s Civil Rights Division’s 65th Anniversary.