British ‘Single-Payer’ Health Care Program Is Cratering. That Should Be Wake-Up Call for US Liberals. 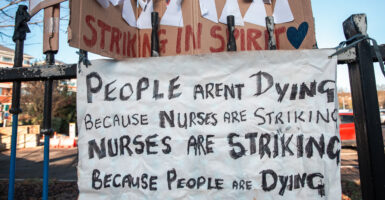 Protest signs are posted outside St. George's Hospital in Tooting, South London, on Thursday amid nurses' strikes over pay and working conditions. Under the National Health Service, Britain has the lowest number of doctors per 1,000 patients in all of Western Europe, while British nurses rank third-lowest (ahead of only Italy and Spain) in their availability to patients. (Photo: Mark Kerrison/In Pictures/Getty Images)

He was asked three times whether he received private medical care or relied upon the National Health Service, the British version of “single-payer” government-run national health insurance.

Sunak dismissed the question as “not really relevant.” But it is.

The prime minister is the head of the British government and is ultimately responsible for the National Health Service, the government agency that’s supposed to provide “free” universal coverage and care for all of Britain’s citizens.

It does no such thing.

According to the BBC, there are 7.2 million British citizens awaiting medical care, or almost 11% of the entire British population. And Sky News reports that more than 400,000 people in England have been awaiting hospital treatment for more than a year.

Right now, the most salient problem is emergency care. According to The Telegraph, December data show that people suffering a heart attack face an average wait of 90 minutes for an ambulance, with some waiting up to two and a half hours. For emergency care, The Telegraph further reports, 55,000 people were forced to wait on hospital gurneys for “at least” 12 hours following emergency department decisions to admit them.

Of course, patients suffering from a stroke or a heart attack are always in a race against time, as medical delays can result in permanent disability or death.

Surveying the carnage, Dr. Adrian Boyle, president of the Royal College of Emergency Medicine, estimated that between 300 and 500 people are dying each week because of delays and related problems in the delivery of emergency medical care.

The COVID-19 pandemic has been a punishing stress test for Britain, as well as for the United States and other countries. America’s performance in that regard has been crippled by several federal government failures, even as the COVID-19 pandemic highlighted the structural weaknesses of Britain’s single-payer health care system.

Writing in the British Medical Journal, public health experts warned  in May 2020—early in the pandemic—that the British government was not prepared to respond well to COVID-19.

In fact, the COVID-19 pandemic simply deepened long-persisting problems underlying the British single-payer program. As the BBC reports, the current crisis in Britain’s single-payer system, though aggravated by a nasty flu season, has been building for “decades.”

For Americans, there’s a lesson here.

Liberals in Congress have been saying that the case for an American version of a single-payer health system—abolishing virtually all private health insurance and transferring health care financing and key decision-making to Congress and federal officials—is even stronger in the aftermath of the COVID-19 pandemic.

The reality, however, is this: The congressional single-payer bill (HR 1976) contains the key components driving the implosion of the British health care system, including government budgeting, bureaucratic central planning, and reduced pay for doctors and nurses.

In sharp contrast to the congressional liberals’ top-down regime, which would restrict private coverage and care for Americans, British patients are still free to go outside of the British single-payer program and spend their own money on private health insurance coverage and care of their choice.

As noted, Sunak, the prime minister, has that option, even though he won’t say whether he has taken advantage of it.

Big reductions in the pay of medical professionals, as authorized in the congressional single-payer legislation, can indeed reduce health care spending. But there is a big price: You pay less, and you get less.

Britain has the lowest number of doctors per 1,000 patients in all of Western Europe, while British nurses rank third-lowest (ahead of only Italy and Spain) in their availability to patients.

Compared to their American counterparts, British doctors and nurses have relatively low pay. There’s nothing shocking about Britain’s single-payer system being periodically hit by labor strikes, as well as serious shortages of vital supplies and equipment.

As in the United States and among countries with advanced economies, Britain’s COVID-19 lockdowns have imposed a heavy price on personal health in delays and denials of medical care, particularly from pauses in medical treatment, including chemotherapy, as well as in preventive care, such as mammograms.

Last August, The Telegraph reported that an estimated 10,000 cancer patients had been waiting for three months. Professor Pat Price, an oncologist with the Imperial College of London, said, “There will be tens of thousands of cancer patients who die unnecessarily because of the disruptions with COVID.”

Even though the pandemic has been receding in Britain, as in the United States, the number of patients getting a “face to face” appointment with a doctor, according to The Telegraph, is still below pre-pandemic levels in England. There, the newspaper notes, only 2% of general practitioner practices are seeing their patients within a two-week period.

Matters are coming to a head, and a broad consensus on the need for reform is emerging.

The editors of The Daily Mirror declare, “Without radical reform, the [National Health Service] is doomed.”  The Guardian, one of Britain’s top left-wing publications, says that the “crisis-ridden” NHS is “falling apart.” Keir Starmer, the leader of Britain’s opposition Labour Party, acknowledges the gravity of the NHS crisis, is criticizing the system’s “bureaucracy,” and is calling for the private sector to help “clear” Britain’s enormous waiting lists.

The right remedy requires the right diagnosis. Mounting problems with Britain’s ailing single-payer health system are systemic and deeply rooted in the arrogant assumptions of central planning; namely, the bureaucratic decision-making that governs the health and the lives of more than 67 million souls.

No one has better summarized the path ahead than Allison Pearson, a prominent columnist with The Telegraph:

We must break free of the coercive control exercised over us by the NHS. We are not to blame for putting it under pressure.

We are not at fault for expecting a feverish child or a 90-year-old with a broken hip to receive prompt attention. The NHS is to blame. No longer must we listen with hushed sympathy to the pathetic excuses of its elusive managers.

We put tens of billions of our national wealth into health care; what we get in return is broken, embarrassing and dangerous. NHS, heal thyself.

Congressional liberals should heed the warnings of experience. Regardless of their promises to make their version of “socialized medicine” work “better,” the same dynamics of their bureaucratic model will replicate the same problems, waiting lists, and delays and denials of care.

That model is falling apart right before our eyes.