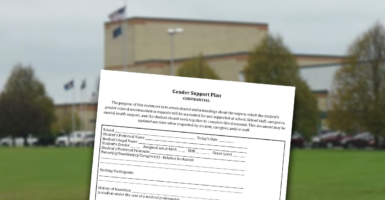 A school counselor in Pendleton, Indiana, was suspended for leaking the existence of the school district's secretive Gender Support Plan, and a teacher there has resigned in part in protest of the policy. (Photo illustration: School photo via Google Maps, edited by Tony Kinnett)

Following the exposure of a hidden “Gender Support Plan” and policy to conceal student transgender procedures from parents, the whistleblower, counselor Kathy McCord, has been placed on immediate and indefinite leave, and could be facing termination.

McCord, a counselor at Pendleton Heights High School in the South Madison Community School Corporation in Indiana, confirmed documents unearthed by parents in Madison County showing that counselors were asking teachers not to reveal a student’s new name and pronouns to parents.

In an exclusive interview, McCord walked The Daily Signal through the processes set up by Andrew Kruer, the assistant superintendent at South Madison in charge of counseling. Kruer had ordered counselors to restrict teachers from sharing information about Gender Support Plans with parents, which caused outrage among parents, teachers, and other Pendleton, Indiana, residents.

McCord confirmed that the school district is using the same Gender Support Plan that The Daily Signal obtained a copy of in blank form from a source who asked to remain anonymous.

Amanda Keegan, a geography and psychology teacher at Pendleton Heights High School, says she resigned in part to protest this policy.

In an exclusive interview with The Daily Signal, Keegan said, “When I had to look at that parent, and feel like I was lying to that parent … I was sick to my stomach. I can’t lie to parents. I can’t do that again.”

Following the exposure to the district’s policies, dozens of concerned parents and community members attended a school board meeting—at which the district both admitted to and denied having the Gender Support Plan. Then-School Board President Joel Sandefur and South Madison Community School Corporation Superintendent Mark Hall evaded questions and blamed the district’s secret transgender policy on unrelated federal law and regulations.

Sandefur later ordered a police officer to remove one parent from the board meeting after he accused the board of lying to parents. Sandefur also accused parents who are concerned about the district’s Gender Support Plan of “not caring about the civil rights of the students.”

Now, McCord, the whistleblower, could be paying the price for the school district’s embarrassment.

Local parent Brandon Godbey informed The Daily Signal that he reached out to the South Madison attendance office, only to be told that McCord was unavailable indefinitely—and that the attendance secretary had been asked to forward all calls about McCord to the superintendent.

An anonymous counselor at South Madison who corroborated McCord’s allegations in The Daily Signal’s initial article has reached out to confirm rumors that McCord had been placed on “indefinite” leave, pending a school board vote over the future of her employment.

This counselor told The Daily Signal, “What Mark [Hall] is doing to Kathy is why I chose to remain anonymous. He’s come for me, too … . [The administration] knows parents and teachers hate the gender policy, and [they] don’t care.”

McCord is refraining from providing comment to The Daily Signal until after the school board makes a decision.

Superintendent Hall and other members of the South Madison administration have refused to provide any comment to The Daily Signal. Sandefur retired from the school board in December, and the current president is now Mike Hanna.

At the last school board meeting, Hall made a point of reassuring parents that the South Madison district would discuss anything with a parent at any time the parent called the school. He claimed the district had no policy or directive to tell staff to lie to parents—but his actions appear to indicate otherwise.

If the district is trying to reassure parents that its transparent, willing to address concerns, and working toward building a beneficial partnership—placing an educator on leave for the high crime of criticizing policy is a strange move.

Retribution against a staff member releasing a document template and an email that could be obtained by any Freedom of Information Act request smacks of trying to cover up actions the district knows aren’t popular.

Threatening the employment of a kind woman who has risked her career for voicing a moral objection to a controversial policy won’t reassure parents. It won’t encourage them to trust the local public school district. The move instead will likely confirm the suspicions parents have about the district’s honesty.

It now appears that South Madison will go to whatever lengths necessary to cover up dishonesty—and that no parent, teacher, or counselor will stand in its way.