‘Making a Mockery of the Military’: 13 GOP Senators Vote to Confirm Green Activist for Energy Post in Defense Department 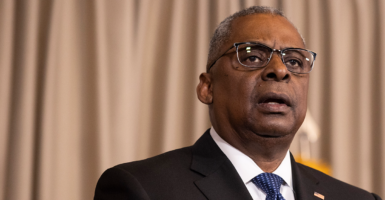 Update: The U.S. Senate confirmed Brendan Owens to the position of assistant secretary for energy, installations, and environment in the Defense Department on Monday night.

The U.S. Senate is set to vote at 5:30 p.m. on the confirmation of Brendan Owens for the position of assistant secretary for energy, installations, and environment in the Defense Department.

“Well, I mean, he’s part of the Green Building Council, so I’m not quite sure what he’s got to do with anything going on at the Department of Defense,” Steven Milloy, founder and publisher of JunkScience.com, told The Daily Signal in a phone interview on Monday.

“I don’t know how much there is to say about it. DOD has got no business wasting taxpayer money on green stuff, it’s got more serious things to worry about, and to take someone from the Green Building Council, I mean, it’s just ridiculous. It’s making a mockery of the military,” Milloy added.

President Joe Biden nominated Owens on March 11, 2022, for the assistant secretary for energy, installations, and environment position in the Defense Department.

While Milloy said he did not suspect “any particular consequences” should the Senate confirm Owens, he insisted that the nomination is “just a total waste. I mean, why is the military spending any time on this kind of stuff of making buildings more efficient?”

“I mean, it doesn’t really even work in the private sector,” Milloy added. “I’m not sure why the military is wasting its time on [this]. It’s just a waste and a distraction and a diversion, and political correctness run amok. It’s got nothing to do with what the military’s supposed to be doing.”

Owens worked as principal of Black Vest Strategy L.L.C., where he “focused on the places where systems in the built environment intersect and interact,” and “policy and technical strategy to optimize and transform the world – delivering equity, health and decarbonization” from Jan. 2021 through Nov. 2022, according to his LinkedIn page. His LinkedIn bio includes his pronouns “He/Him” and that he’s “working for equity, human health and climate.” Black Vest Strategy continues to list him as a fellow.

Owens also served as vice president for “leed technical development” at the U.S. Green Building Council from June 2002 to October 2020 in Washington, D.C., according to LinkedIn.

Owens’ “About” section on his LinkedIn page says that he is “passionate about green buildings, market transformation and programs that enable people and companies to decarbonize and create an equitable and healthy world.”

“His background is in sustainability, environmental, ESG type of things. He started a technology company to democratize ESG and placing those ESG priorities into our military is essentially just dangerous for national security,” Clint Brown, vice president of government relations at The Heritage Foundation, told The Daily Signal in an interview. (The Daily Signal is Heritage’s multimedia news organization.)

If we prioritize that above warfighting or compromise our warfighting ability in some way to meet some sort of ESG goal, then we’re putting America’s national security at risk.

And it’s an ideology that is strongly associated with the Left, far-left progressives, and doesn’t reflect the values of the American people.

Owens did not immediately respond to The Daily Signal’s request for comment.