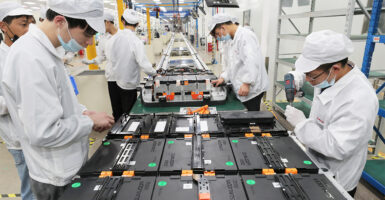 Diana Furchtgott-Roth is the director of the Center for Energy, Climate and Environment and the Herbert and Joyce Morgan Fellow at The Heritage Foundation.

When Gov. Glenn Youngkin decided to remove the commonwealth of Virginia from competing with Michigan for an electric vehicle battery plant owned by Ford Motor Co. but operated by a Chinese industrial giant, he acted both in Virginia’s and America’s best interests.

His decision displays strategic insight, choosing American interests over the Chinese game plan. Virginia has the luxury of such a choice because it has already attracted so much business investment that it does not need Chinese factories.

Beijing would have controlled both the technology and the factory operations at the plant, a joint enterprise between Ford and Contemporary Amperex Technology Co. Ltd., or CATL. It would have been inappropriate to use Virginians’ tax dollars to subsidize such an enterprise with tax breaks and other incentives to attract the plant to the commonwealth.

That’s because China is engaged in an economic war with democracies around the globe and America must stay energy-independent.

If California and the Biden administration succeed in limiting future new vehicle sales to battery-powered electric vehicles, American or America-friendly companies should be producing the batteries, not China. Congress allocated over $7 billion in electric vehicle tax incentives in 2022’s Inflation Reduction Act for domestic, not Chinese, production.

Moreover, CATL is not just another Chinese company. China dominates battery technology, and it accounts for over 70% of global electric vehicle battery production capacity. Within the battery industry, CATL is the largest producer, profiting from its close relations with the Chinese Communist Party.

Former Assistant Secretary of Energy Daniel Simmons told me, “Governor Youngkin’s opinion matters because Ford and CATL wanted subsidies from Virginia’s taxpayers. If [electric vehicles] are truly a future people want, there is no need for subsidies, and especially no subsidies should go to Chinese battery companies.”

The CCP has facilitated access to domestic and foreign minerals for CATL battery production. Minerals such as lithium and cobalt are essential for batteries, and CATL has a ready supply. It gets lithium from its operations in Western China’s Qinghai province, aided by government funding; and it gets cobalt from Kisanfu, in the Democratic Republic of Congo, where it purchased 25% of the cobalt reserves in 2022.

In addition, China’s “Made in China 2025 Plan,” launched in 2015 by Prime Minister Li Keqiang, aimed to encourage Chinese production across a wide range of industries. Among regulations helpful to CATL, it mandated electric cars sold in China have Chinese-made batteries in order for buyers to qualify for credits.

For instance, in 2016, General Motors Co. switched its electric Buick Velite that it sells in China from South Korean LG batteries to CATL batteries to comply with the Made in China regulation. Today, its new Buick Electra E5, recently rolled out for the Chinese market, will have CATL batteries, while the Electras for the North American market will have LG batteries.

BMW used CATL batteries in 2011 for its Chinese vehicle line BMW Brilliance Automotive and later used them for cars in other parts of the globe.

In December, Honda signed an agreement with CATL to purchase enough batteries to power 1 million electric vehicles from 2024 through 2030. The Honda vehicles will be made in China and potentially exported to America.

Why American tax credits should help CATL grow is a mystery. With a joint Ford-CATL plant, the Chinese would be major beneficiaries of the battery incentives in the Inflation Reduction Act. These were envisioned by Congress for U.S. producers to enable America to catch up to China—not to make China stronger.

And just as Russia stopped the flow of natural gas to Europe, CATL could pause production at any time due to political tensions between the United States and China. CATL reportedly reconsidered its plans to establish a new plant in the U.S. after former House Speaker Nancy Pelosi’s, D-Calif., trip to Taiwan in 2022, and the Chinese government discouraged CATL from pursuing U.S. investments.

Although CATL has not announced how dependent the plant would be on Chinese workers, it could import workers for operational roles in the plant, reducing jobs for Americans. China is anti-labor and does this in Africa, bringing its own workers to its “Belt and Road” infrastructure projects there. CATL would also control hours of work and scheduling, a vital element of the compensation package.

Virginia doesn’t need to pander to China because other companies are moving there, attracted by Youngkin’s program of low taxes and efficient regulation.

The unemployment rate in Virginia in November was 2.8%, making it in the top dozen states for low unemployment. More than 85,000 more Virginians are working now than when the governor took office in January 2022.

According to Virginia Secretary of Labor Bryan Slater, “We have 300,000 open jobs in Virginia right now, and more companies are expressing interest in the commonwealth every day. And while we are constantly seeking new businesses, we need to always protect U.S. national security interests.”

On Jan. 20, Youngkin announced that Amazon Web Services was investing $35 billion through 2040 to build data centers across Virginia as well as a new fulfillment center in Augusta County. LEGO Group is spending $1 billion to build a manufacturing plant, Boeing and Raytheon are moving headquarters to Virginia, and Hilton is expanding its headquarters. Thermo Fisher Scientific is enlarging its laboratory, and DroneUp and SmartRoof announced growth plans.

If electric vehicles overtake the internal combustion engine, America should not cede its energy independence to China or other unfriendly nations. Michigan, where Ford and CATL are reportedly considering a joint plant, should also reject the deal.

Kudos to Youngkin for standing up for America. The deeper question is why Ford and other states are choosing Chinese over American interests.